DAY 1:
10 bricks for the construction of an elephant feeding kitchen in Zambia

A major thread to African elephants is the global greed for ivory. The grey giants are hunted mercilessly. In many parts of Africa they are already on the brink of extinction. People use the ivory as a precious material to manufacture jewellery, billiard balls, piano keys or the like. The poachers only leave the little ones alive: Young elephants have no tusks - killing them would be a waste of ammunition. However, young elephants cannot survive in the wilderness without their families support, because they cannot defend themselves against other predators or feed themselves, because they need up to 25 litres of their mother’s milk every day.

Build a food kitchen for the elephant orphanage in Zambia

Elephant orphanage as a tourist attraction, symbolic action for the protection of species and source of income for the local population

A million elephants originally inhabited the African continent. Throughout the 20th century, the elephant populations were dramatically reduced and even eradicated in some regions. Ivory poaching halved Africa's elephant population between1979-1989 from about 1.2 million to 600,000. Today a component of 422,000 animals is certain, maximum estimates are of 670,000 ( http://www.elephantdatabase.org ). Although the CITES Convention, passed in 1989, put a ban on international ivory trade and the poaching declined significantly since the main markets in Europe collapsed, some governments demanded eight years later that trading should be resumed. Often, the trade has a semi-legal status as in Zimbabwe and Tanzania, where ivory carvings may be exported "non-commercially". This legal ambiguity is the perfect cover for illegal traders. Especially in Asian countries, the ivory trade has experienced a boom in recent years. In 2000, three African countries exported 50 tons of ivory from government stockpiles to Japan and again in 2008, 108 tons to Japan and China. For the handler it is about big business. About 3.8 tons of ivory are worth 2.5 million Euros alone on the black market. Therefore, it is difficult to get the problem under control. The illegal trade has taken a dramatic growth, particularly since 2011.

In the elephant orphanage in Lusaka, the elephants are taken care of. The elephant orphanage is well established and functional by now. In order to increase the capacity of the station it is now time to provide more infrastructures and thus create a permanent institution for Zambia's elephants. This implies a food kitchen, in a weatherproof, sturdy building. The milk for the eleven elephant orphans is currently prepared in tents. This temporary solution is very cumbersome for the workers, because about 300 litres of milk are produced here every day. Therefore the installation of running water and electricity are essential.

We use the materials on site - and are therefore reliant on the use of what is currently on the market, which can sometimes involve unpredictable delays. 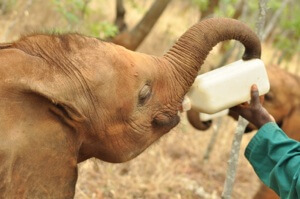 Zambia is situated on a high plateau, over 1000 meters high, surrounded by deep valleys and depressions. Therefore, there are countless waterfalls in the country, of which Victoria Falls is the most famous.

Prowildlife works closely together with renowned scientists at the University of Oxford to protect species. The association was certified for respecting the criteria of the transparency initiative for a transparent civil society (ITZ in Germany) and all invoice reports will be available publicly on the website. Even the DZI (German Central Institute for Social Issues) certified the association has an open and transparent information behaviour.