DAY 13:
One day of tuition fees for a student in the DR Congo

Legény Numbi Shaka has recently started his own project. He had the brilliant idea to convince the local radio station KFM to let him do his own show with a quiz for various schools of Maniema. He said he wanted to make the children curious, to read books and newspapers and to make them eager to learn a lot, so that they can develop a critical opinion. For him it was only possible to start this personal project, because as a scholar of Studying without Borders he doesn't have to pay for his tuition fees and consequently doesn't have to spend his free time working.

Students who cannot afford to study

Number of students whose tuition fees can be paid

The Democratic Republic of the Congo has suffered greatly from the civil wars between 1996 and 2003. Kindu the capital of Maniema province in the eastern Democratic Republic of the Congo, where the project is located was particularly affected by the wars. Large parts of Kindu were occupied during five years by various rebel troops. Poverty and unemployment are very high in Kindu. Despite a size of about 200,000 inhabitants, most of Kindu resembles a large bush village. The poor accessibility makes all not locally produced goods very expensive. A large part of the population suffers from under nutrition. The town is accessible only by plane or with the old diesel train from Lubumbashi, which needs about a month for 1,500 km. There are no paved roads and the existing mud roads end after a few kilometres, because most of the bridges have been destroyed during the war. Consequently, professors of the university often have to be flown in to teach. This is a major reason why education is so expensive. Many young people can therefore not afford to study. At the same time, it is crucial for a region in a post conflict situation like in the Kindu to have skilled young people that help rebuilding the region.

Through the scholarship programme, young people are encouraged to develop their own projects that they can fully implement after their graduation. This way they contribute to the reconstruction of their home country. Scholars are not only students but also act as multipliers of their own education and knowledge. The idea is that the entire region benefits from the support.

Decades of development policy practice have installed dependency mentalities. To convince the scholars that they themselves have the potential to contribute to the reconstruction of their home country and that they are not exclusively dependent on "outside" aid, constitutes a major challenge. 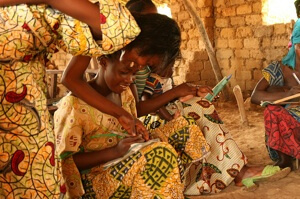 The second largest country of the continent, located in the heart of Africa. Despite the immense mineral wealth of the country, it is among the poorest countries in the world.