DAY 17:
One day of tutoring for a child in Berlin-Neukölln

'- breaking the cycle of welfare dependency

"Today yesterday is over". commented a 12-year-old child from the Rollberg district, who had missed an appointment the previous day. What exactly is an appointment? Why should I arrive on time? How do I communicate properly? Many children and young people in the social hot-spot of the Rollberg district in Berlin-Neukölln are missing these basics. Volunteer mentors show them the opportunities and prospects and guide them on their way through the years. The main goal is to open a door for the children and young people to the professional world and strengthen them, so that they can turn their backs on the vicious cycle of lack of education, unemployment and welfare dependency.

Number of children that are supported through the programme

Number of children who improve their school performance

The vicious circle for children coming from a deprived area is broken. They find training courses and get better acces to education.

The Rollberg district is in a central area of the German capital and was ranked last out of 417 planning areas in the Berlin social structure atlas. While the low rents here have attracted students in the recent years, a majority of 70 % of the population in Neukölln still lives of public welfare benefits. The main problem in the Rollberg district is not poverty, but a lack of education for all population groups. Children are missing role-models. Families are often unable to support their children. They often don't speak very good German and cannot write it well either and this is regardless of whether they are with or without an immigrant background. Domestic violence as well as alcohol abuse are also frequently encountered in these families. Other families stick closely to commands and prohibitions of the Islam, and their world is limited to the extended family.

The "Network Schülerhilfe Rollberg" is tailored to the needs of disadvantaged children. The network tries to provide training in the main topics of education and social competence. Volunteer mentors are trying to support children with their commitment and guidance. Each mentor takes care of one or two children and meets with them at least once a week over a long period of time. The mentors offer the children access to another educational, cultural and professional world outside of their neighborhood.

The network was launched in 2003 and started to support elementary school children. In the meantime, many of them have become upper year students and usually do not want to give up their mentors. To meet the increasing demand for mentors is one of our current challenges as the project constantly expands. 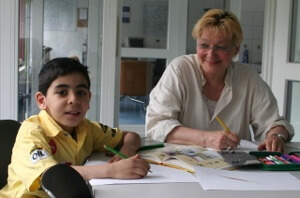 Germany has the largest economy in Europe and the fourth largest in the world.