DAY 21:
Material for one textile craft lesson for vulnerable women in Turkey

For over 10 years, the city of Batman has had a sad reputation: Here, many women take their own lives. In 2006, the UN Special Reporter travelled to address the issue of violence against women through the southeast of Turkey. Before and after this journey there had been numerous publications on the subject of "honour killings disguised as suicides." The behaviour of women is strictly observed in families in southeastern Turkey who often live very traditionally. If women oppose patriarchal domestic violence, they put their lives at risk.

Financial alternatives for women at risk

Textile materials are purchased for the textile courses

In the long run, the project is financed by the sales of the products and the participating women will then be able provide help to other women in the region

Large families who have previously lived as patrilineal tribal societies in the country, now continue to live by their traditions in a small space: Women represent the honor of the family and are continuously exposed to patriarchal violence by the extreme local honor code. Many claim that the suicides are actually honor killings. The government has taken significant steps in recent years to reduce the number of honor killings. Although the suicide rate has decreased in Batman, women are still at risk.

Financial dependence is one of the reasons why women endure domestic violence and threats more often than they should. Through a safe haven where women have opportunities for moving forward, such as the visit of textile courses, they can protect themselves from domestic violence.

Non-governmental organisations and individual initiatives are generally not subsidised in Turkey and in Batman. This is why the particular challenge of the project is to become self-supporting in the future, so that women can continue their work with their own ressources. 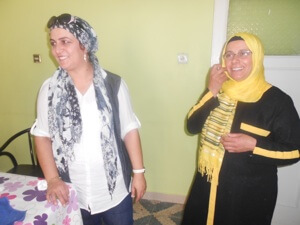 Extreme gap between east and west, with the east being very neglected and impoverished; extreme underdevelopment especially in the southeastern part of Turkey.