DAY 23:
Bandages for a leprosy patient in South India

requires a lot of bandages and a lot of patience

For Kumar it was a shock when at the age of 16 he learned that he had leprosy. To spare his family the shame, he tried to keep the disease a secret for as long as possible. In addition to leprosy, he also fell ill with tuberculosis. When he was half-paralysed in his hut, his family called for help. After staying at the leprosy hospital where he was treated, he could walk again and return home. With further assistance, guidance on self-help and a cash injection, Kumar has managed to recover and is now the proud owner of a small backpack factory. The leprosy hospital in Kathipudi is the point of contact for all those affected within a 300km radius.

Number of patients who could be provided with a bandage set

Measurable decrease in the infection of leprosy patients through improved wound hygiene.

The measure increases the leper's quality of life. They will receive social rehabilitation and guidance towards self-help. Many of them are able to earn their livelihood after their successful treatment and are reintegrated into the rural society.

Lepra, also known as "leprosy" in the Middle Ages, is a disease that the infected person itself was blamed for, both in Christianity and in other religions. They were believed to be punished for their sins by God with mutilation and were expelled from society. Although the elucidation of the last decades has been very successful, the fight against this terrible stigma is still an important task of any work cocerned with leprosy. The disease is still a major problem in India. Thanks to the work of many NGOs and the Indian government, the number of victims has decreased. This fact has led to disease's neglect and even the premature announcement of its eradication.

Leprosy patients do not notice when they get hurt. They step in thorns and splinters of glass, especially women get scalded with hot water while cooking and often burn semselves with hot pans. The wound treatment is difficult without sanitary facilities and no bandages. The only action is often just an old rag tied around the wound. As a consequence, infections are the most common cause of death among leprosy patients. That is why it is so important that the wound care at home is supported.

All supplies of health care are scarce. If there aren't enough funds, one of the two annual issuances of dressing materials is cancelled. An additional challenge is to motivate patients to care for their wounds regularly. Since they are among the poorest in the country, to them the problem of their wounds is secondary. As long as they aren't in pain, they aren't concerned with their wounds. 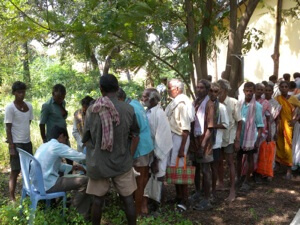 The biggest democracy of the world

Highly experienced association that relies heavily on its volunteers.