Give malaria no chance!

Malaria is a scourge for the Urarinas living in Peru's Amazon region. Juana, a young Urarina, was already unconscious when she was brought to the 'Tucunare' clinic. The medical diagnosis was high fever due to tropical malaria. After an intravenous treatment, Juana regained consciousness - and several days later she gave birth to a healthy child, even though, she was still suffering from the malaria infection and severe anemia. Juana and her child stayed in the clinic for some time to recover before they could both return to their village. Without the medical aid, they wouldn't have survived. If the mother remembers to protect herself and the baby during the night with a mosquito net, the chances of another infection are strongly minimalized. Juana was lucky that her relatives brought her to the clinic.

The 'Tucunare' clinic provides the health aides in the Urarinas' settlements with the necessary malaria tests and medicine. The health aides are trained to use the medicine for treatment.

The Urarinas have not been living isolated anymore for a long time, now: initially, they retreated to remote regions to escape slavery as rubber collectors. Approximately 70 years ago, the first settlers came to the Chamber River ('Rio Chamber'). Later, lumberjacks, merchants, and crude oil seekers came to the Chamber River bringing infectious diseases to the region which the immune system of the indigenous Urarinas was powerless against (source: http://saiic.nativeweb.org/any/urarina.html). Numerous cases of pertussis, sometimes deadly, lead the Urarinas to seek foreign aid through the mediation of anthropologists working in the region, the Freundeskreis Indianerhilfe intervened. Vaccinations and medical treatment successfully reduced the most dangerous infectious diseases. Malaria is a problem in many tropical countries. The disease, transmitted through mosquito bites, can be deadly. Reoccurring malaria attacks can lead to a general weakening of the body. The inhabitants of the Amazon region lose their capability to work, they are unable to hunt or to cultivate their fields. The result is less food which can lead to malnourishment for the entire family. Furthermore, malnourishment makes the Urarinas vulnerable to other diseases. The birth weight of new borns with mothers suffering from malaria during the pregnancy is significantly lowered - a bad starting point in an environment with many health risks.

In 1998, the Freundeskreis Indianerhilfe built a health clinic, a simple wooden cabin, in a settlement of the Urarinas. A doctor is always present. Malaria is not the only disease that is treated there, but the reduction of malaria is a priority of their work. Since the territory of the Urarinas has a size comparable to Cyprus, the doctors can only occasionally visit the different settlements. Therefore, health aides have been trained to do the malaria tests and even carry out the treatment. Additionally, the mosquitos transmitting the disease are fought with pyrethrum. The hideouts of the mosquitos in the Urarinas' cabins are sprinkled with the pyrethrum mix on a regular basis.

The doctors often have to travel for days on boats on rivers through the tropical forest to reach the settlements of the Urarinas. 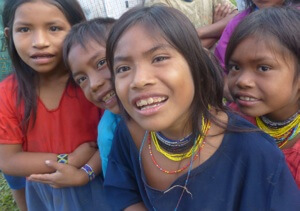 Peru is famous for the ruins of the Inca capital Machu Picchu and the Titicaca lake at almost 4000 meters above sea level. The Urarinas are not descendants of the Incas but their own indigenous people.