Day 4
Soccer training for a refugee girl in Berlin

Flight to Germany - a home match?

“Can we join the game?” It was the girls’ longing glazes posing that question last summer. At that time we offered a soccer match in one of the three refugee centers in Berlin-Reinickendorf as part of a neighborhood festival. Our hitherto projects prove that not only boys are keen on soccer. Girls are not only as enthusiastic about it as boys but also very talented. Doing sports together is moreover a perfect instrument to bridge and even eliminate cultural differences between refugee children and German children and make new friends.

Recreational activities through soccer training for refugee girls between the ages of 9 and 13 in Berlin-Reinickendorf.

Once a week we offer soccer training for the girls in our cooperating schools.

Amount of girls who are able to participate in the training.

Improved self-confidence through competencies in soccer

Implementation of and broadening extracurricular activities and useful recreational activities for refugee girls, strengthened self-confidence, and becoming familiar with different ways of life in Berlin through access to associations for the girls after end of project.

More than 45.2 million people worldwide have presently fled their countries due to wars, economic drawbacks or persecution. Many of them seek refuge in Germany and hope for a better life. Although in absolute numbers Germany is hosting the majority of refugees within Europe (Eurostat, 2013), these people spend years living in precarious circumstances, with fear of being deported and without any support to integrate successfully into society. This situation supports the formation of parallel societies and ignores the many potentials those people bring along. Demographic change and skills shortage have also focused on refugees for targeted advancement (Studnitz, 2011), but progress is slow. Prejudices, fear of foreign infiltration, and especially lacking financial means are some of the reasons why there are not yet enough programs for a broad and comprehensive support. The children suffer most from it. ABSATZ Of the 12.000 refugees currently living with an uncertain status in Berlin (German parliament 2012), more than 1000 refugees are distributed over the three refugee centers in Berlin-Reinickendorf. While Reinickendorf has a proper middle-class reputation the respective planning areas and neighborhoods distinguish significantly from each other. While the district itself ranges among Berlin average in terms of unemployment rate, aid money, and population with migrant background the situation in the Auguste Victoria-Allee neighborhood, which imbeds all the three refugee centers that have opened only in the last three years, looks paler. There are rarely recreational activities in the area, especially for the girls who live in the refugee centers together with their parents. However, it is particularly the girls who are in need of support, also because they face special difficulties in in participating in society autonomously and independently.

Once a week the association Kein Abseits e.V. (No offside) offers soccer for girls between 9 and 13 years in cooperation with a school. In particular for the girls from the refugee centers the training facilitates recreational activities together with children from Berlin-Reinickendorf. The experienced trainers and a pedagogic supervision ensure a comprehensive care and build relationships of trust with the girls, who often suffer from traumatic experiences they have made during their flights.

The selection of the girls keeps being a challenge. We have to convince the parents of the benefit of our program, as they are mostly not familiar with our society and its structures and hesitate to give their girls in “foreign” hands. Moreover, they consider soccer to be a sport for boys. However, we can show many positive examples and our employees are very sensitive with regard to intercultural communication. In addition we enjoy public confidence from schools and refugee centers. 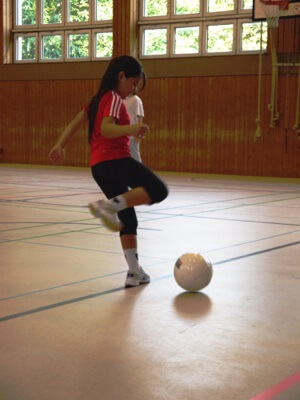 The German female national soccer team has won eight European championships, the last six of them in a row. In addition it is two-time world champion!

We have currently achieved step 2 for the Phineo Seal