Day 6
Medical treatment for a child in Guinea

The outbreak of Ebola in West Africa in 2014 has terrified the world. The dimensions of an Ebola epidemic have never been that extensive. The first Ebola patient has already died on 28 December 2013 in Meliandou, a small village in Guinea. Guinea’s capital Conakry finds itself in a crisis situation caused by the epidemic. However, apart from Ebola-infected people, the inhabitants suffer from other diseases as well and the officical health system is completely overwhelmed by the crisis. The United Nations has already warned in September of the collapse of the Ebola-effected countries.

Treatment of sick children in Conakry.

Children beome healthy again, don't miss in school and have better chances to develop. The system of St. Gabriel serves as role model leading to less corruption in other health centers.

By coping with the current crisis the already structural weak country is put to the test. The people of Guinea could be wealthy and finance a state system, which is able to better deal with the epidemic than the current one. Half of the entire aluminum ore of the world is found here and without aluminum there would be no airplanes for example. The earth is rich of diamonds and gold. Gold has been cut here already since the 17th century and in many countries gold coins have been called “guineas” in earlier timers. Unfortunately the country has been extremely unlucky with its governments. It is mainly members of the government and foreign companies that profit from the output of the resources and corruption is a common phenomenon. Among the international index of corruption of Transparency International Guinea has reached rank 150 out of 175. In order to face the current challenge, non-state actors have joined forces under the lead of Doctors Without Borders and developed a strategy to fight the crisis. Fidesco e.V., the partner organization of 24 Good Deeds, is running a health center in Conakry. Every patient is accepted here in a first step. In case of suspicion of Ebola the patients will be isolated and handed on to the Ebola Center of Doctors Without Borders. All other patients are treated in the health center.

One hundred thousand patients come to the St. Gabriel center every year: 17% of them are grown-ups, 30% are pregnant women who come for precaution or birth and 53% are sick children (preliminary numbers 2013). The ill people pay a fixed price of about 75 cent. For the price they receive all necessary checkups and medication until they have completely recovered. In case of a fallback within 14 days after the checkup they are treated for free. St Gabriel has the reputation to be the best health center in Guinea. The city of Conakry is build on a peninsula in the Atlantic Ocean and stretches across ca. 35 km. The center is placed in the middle of the city. Most people earn less than one Euro per day. The health center refuses no one. In case someone cannot afford the treatment there is a cash box for extremely poor patients. This is where the money from 24 Good Deeds will be added. But how does the clinic know that it really supports the most needy? Most of the people approaching the clinic are well known as they are living in the area. So other patients are able to confirm the poverty of respective people. However, the health center cannot always be sure about it and sometimes takes the risk to also treat less needy persons for free if they ask.

The corruption within the country: Employees of the center who demand bribes are dismissed immediately. For this reason there is no corruption in the health center of St. Gabriel. In exchange the employees receive an extra sack of rice (50 kg) per month in addition to their salary. 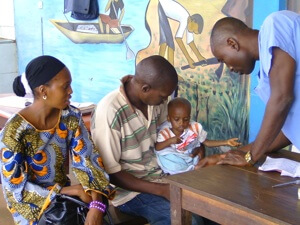