Day 8
Education of 25 parents on child marriage in Bangladesh

Bangladesh is a country of records. With 156 million inhabitants it has the highest area-population ratio in the world. On average there are living as many people on one square kilometer as in the inner cities of Germany’s metropolises. The biggest rivers of the Indian subcontinent, Ganges and Brahmaputra, run through Bangladesh. In 2014, Bangladesh made it into the Guinness Book of World Records for the biggest national flag – depicted by thousands of humans. There are sad records as well. The capital Dhaka is ranked second among the cities with the lowest living quality worldwide. It also is co-leading the ranking in early marriage: More than 65% of the girls are being married underage, some already at the age of ten. Only Afghanistan and Niger offer sadder numbers.

Educational advertising among the local population about the dangers of early child marriage.

Information workshops by employees of the NGO Mati for parents, religious authorities, the political elite, and school classes.

Amount of people who were able to participate in the workshops.

The girls’ right to education shall be established in the heads of the local population. Political decision-makers shall engage for the topic within the communities. The issue of domestic violence shall be broached and lead to legal consequences more often.

Bangladesh has the third highest ratio of child marriage worldwide. More than 65% of the girls are being married before the age of 18. The reason for that is a combination of poverty driven and social factors. Seventy-five per cent of Bangladesh’s population lives of agriculture, most of them do not own land by themselves and farm on leased land. Thirty-five per cent famish chronically. Women do not have a well standing in the Bengali society. Daughters are considered to be a wasted investment as they join the family of the husband after being married. So by investing into the education of their daughters the parents feel like having invested in the family of the future husband only. Therefore families with many children and limited income rather invest in the education of their sons first as these will stay with the parents, found their own family and take care of their aged parents later on. In reality this is not working well any more as more and more sons move into the bigger cities, looking for better work and living conditions. They leave their parents behind. It is then mostly the daughters who live nearby and take care of their parents. Another issue is the dowry. Poor families keep asking for a dowry of the girl’s family and the parents have to incur high debts. The younger the girl is the higher is her “value” as she is at the blossom of her physical development. This is why the demands of a dowry then are by far lower than for older girls. In addition to that there is the societal view on female sexuality. Fathers and husbands decide on the female body. Parents are choosing the husband and the wife has no physical right of self-determination. If a young girl does not wait until her parents have chosen a husband but bonds with the other sex on her own, even though this might still be innocent, in this has severe consequences for the reputation of her family. It could for example affect the chances of marriage of her sisters and moreover increase the dowry. As soon as a young girl reaches puberty, the “dangerous” time for the family starts and to prevent a damage of her honor the problem is being solved in marrying the young girls as soon as possible so her sexuality takes place in a societal sanctioned space. Often there is also massive pressure from neighbors and religious authorities on the family.

Educational advertising is extremely necessary. Parents must know how child marriage affects girls physically and psychologically and they must know about the healthy, social and economic consequences for everyone involved. Parents only see the advantage of having one eater less at the table, but often the husband sends the girl – with a baby in her arms – back to her parents, as a new wife brings a new dowry. Child marriage is forbidden by law. However, religious authorities and political elites often support the practice and the police do not intervene. Women are of no value in the eyes of society. The elites must be included to ostracize child marriage. With educational scholarships girls can be prevented from leaving school and in educated families child marriage doesn’t take place.

Child marriage is considered as part of the local tradition and therefore always defended in first place. Woman who themselves did not receive education and also have been married in the age of 10 or 12, must be encouraged to advocate for their girls in a male society. For this they need arguments. Our trainings emphasize that child marriage is of no economic benefit. We look for allies within the local elite. 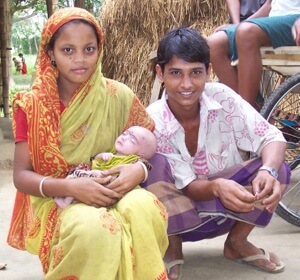