Career guidance and violence prevention in the townships

"I am an instrument of change. I want to fight HIV and AIDS, I want to fight poverty, I want to fight crime, I want to fight violence; in my community and in the entire world!" It is with a lot of pride that Faith, a young Boxgirls participant presents the poem she wrote. Sports and leadership workshops teach these girls to confidently assert their rights and actively shape their social environment. Access to education and career counselling for girls in townships cannot be taken for granted. The curricula taught at Boxgirls help these girls pursue their educational and professional goals. "We also talk about gender-based violence with the girls and teach them ways of de-escalating violent situations," Andiswa Madikane explains. She is a supervisor of the project and sees herself not only as a trainer, but most of all as a mentor for these girls. "We organise events in the community that deal with women's rights issues and where the girls can also present the skills they have acquired." Because long-term change will only be realised, if the local communities get involved and the message it taken into the families and to the teachers. "I often think of a girl living in my street. Her name is Andisiwe and I knew her as a shy and very introverted person. Since she became part of Boxgirls, she gained self-esteem, clearly voices her views and enjoys going to school. Enjoyment at school and sports as well as education for social change is what informs our motto: Strong girls. Secure communities."

Twice weekly, instructors at the Boxgirls After School Club give career and vocational counselling as well as teaching social skills.

165 girls learn important skills to protect themselves against sexualised violence and improve their school performance.

The girls have more self-confidence and better career prospects, and they are able to pursue their educational and personal goals.

Allow women in townships to participate in social and political life and strengthen the role of women in the community.

Unequal gender relations such as they exist worldwide, are even exacerbated in South Africa to the detriment of women by the colonial legacy and the Apartheid system. The society sees aggression and brutality as expressions of male strength, whereas weakness is seen as a female attribute. Gender-based violence is, especially in the townships, one of the most serious problems in South Africa. 40 % of girls enrolled in the schools of Khayelitsha have stated that they have been victims of sexualised violence at least once, and estimates clearly show that only one in nine cases are reported. Even though two laws protecting women from violence were passed in South Africa between 1998 and 2007, but in fact these were implemented very poorly. The authoritarian structures are further cemented by economic imbalances as well as insufficient educational and professional prospects for women. As part of Apartheid politics, the black population was particularly oppressed. So girls in townships are today disadvantaged for two reasons: because of their skin colour and their gender. Schools still lack the resources and qualified teaching staff. A direct consequence of that is low educational standards and lacking professional prospects – particularly for young girls and women.

The career counselling and violence prevention programme of the Boxgirls After School Club teach the girls strategies of de-escalation on the one hand, and gives them valuable insights of future career opportunities. By involving the local communities in the project, the values of strengthening women that are imparted are also carried outside and thus have greater impact. Traditional social structures can that way be counteracted with greater determination. The social skills they have learned help the girls to solve problems constructively, pursue their educational and professional goals and better defend themselves against gender-based violence.

Particularly critical for the successful implementation of the project is the support of the parents and the local communities. Face-to-face contact to, regular meetings and information events with the parents are important for creating a link. The trainers for the project are all members of the community themselves and so can be confidants to the parents and role models to the girls. Very promising results of an evaluation contributed to getting the parents to back the project and to actively support the education and professional prospects of their daughters. 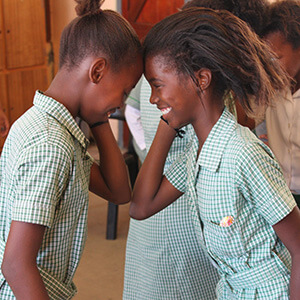 Soft tourism meets townships; exploitative Apartheid policies are followed by shining figures such as Nelson Mandela - in short: South Africa is a country of opposites.