Diabetes does not have to be fatal

Very little money to live on, insufficient shelter and little to no medical care. This is currently the life of many Syrian refugees in Lebanon. This particularly affects the elderly who had to flee from across the border. In spite of the precarious situation in Lebanon, they are frequently left behind by younger family members because they do not have the strength to carry on to Europe. In such emergency situations, aid organisations tend to focus their work on treating acute illnesses. However, there is also a need to take care of the chronically ill. From a certain age, many people depend on daily medications. If they have to flee, they take as much of their medications as they can, not sure when they will be able to replenish their supplies. In Lebanon the health care system is overwhelmed in light of the refugee situation, and the elderly are often overlooked. HelpAge offers free medical care to elderly people with chronically illnesses. Stationary and mobile health centres reach many people who would otherwise be at risk due to a lack of treatment.

Medical treatment of elderly refugees with chronic illnesses in Lebanon.

Mobile and stationary health centres provide the elderly in Lebanon free medical treatment for chronic illnesses such as diabetes.

Every month, 1.885 chronically ill patients at the basic health care facilities can be provided with adequate medicines and treatment.

The health of chronically ill refugees in Lebanon improves significantly.

The rate of mortality among elderly refugees comes down. The psychological wellbeing of these people improves remarkably.

Since 2015, Lebanon is the country with the highest concentration of refugees per inhabitant. There are 220 refugees per 1.000 Lebanese people. A total of 1.1 million (registered) Syrian refugees live in this small country and put a lot of strain on it in terms of the available resources and infrastructure. As a result of a reduction in international aid money for Lebanon and the increased focus of most humanitarian actors on acute medical care, infectious diseases and paediatric health, these cuts are beginning to also have an effect on the Lebanese population. For elderly refugees suffering from chronic diseases, this means that they have no access to medication and care. Otherwise treatable illnesses such as diabetes, can rapidly become life-threatening. Meanwhile, refugees in Lebanon are sinking into poverty. There are no income opportunities and any reserves are depleted – about 70 % lived below the poverty line (3,84 US$ p.p./day) in 2015. In a 2015 assessment, only 6 % of Syrian households stated that they could afford medical treatment. At 85 %, chronic illnesses are the main cause of death in Lebanon.

Supported by four local partners, HelpAge offers trainings for hospital staff, which is to ensure that eventually all processes meet the WHO standards. To improve the work of the doctors, they are provided with the appropriate equipment and medical supplies. Glucometers and insulin are particularly hard to come by in Lebanon. Among others, HelpAge supplies this and wants to continue to be able to do so reliably until late 2018. Within the restructuring of health care facilities, it is intended to update the pharmacies in the hospitals in order to be able to store medicines safely and under hygienic conditions.

Because the Lebanese health care system is under such strain, the health centres lack a proper system for managing appointments. As a result, many people have to wait for hours to be treated. Also, patient charts are usually not kept, which can have negative ramifications for the chronically ill (where the progress of the disease should be documented over time). Equipment and medications are constantly in short supply, and usually stocks have already run out by the middle of the month. 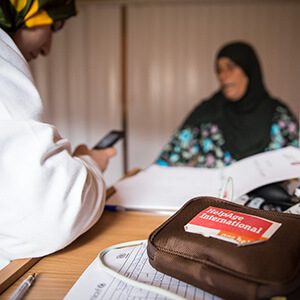 The country name 'Lebanon' has been in use continuously for 4.000 years and is thus the oldest in the world. It is mentioned 75 times in the Old Testament. It is the only country in the Arab World with no deserts.