Day 2
Daily fruit ration for an orangutan in Sumatra

Orangutans: Gardners of the rain forest

Only 5.000 to 7.000 Sumatran orangutans are left in the Asian jungle. Because the last of the rain forests are being cleared for monoculture plantations, the habitat of these red apes is fast disappearing – with dramatic consequences: They are in danger of becoming extinct (IUCN et al., 2015). Many animals are starving, some wander into the plantations. There they look for food and are shot as pests and their young sold into the illegal pet trade. The Sumatran Orangutan Conservation Programme (SOCP) is fighting to prevent the extinction of this species. The organisation takes care of homeless animals, as well as those kept illegally as pets. The orangutans are often traumatised and sick, and need to be cared for and rehabituated at the centre. One day they should be able to live freely in the wild again. Introducing animals back into the wild not only ensures the survival of this species in its original habitat, but also of many other species: As the 'gardeners of the forest', orangutans disperse the seeds of the fruits that they eat and thus ensure the survival of the rain forest.

The daily ration of fresh fruits for the orangutans at the Sumatran Orangutan Conservation Programme (SCOP).

The SOCP buys the daily supply of fresh fruits for the orangutans living at the centre from the local population.

The daily supply of fresh fruits for 50 orangutans was provided.

After their rehabilitation the orangutans can be released into protected areas where no orangutans have lived so far.

Re-introduction of orangutans into protected areas.

The orangutans live high up in the treetops in the lush rainforest. Indonesia is now one of the largest producers of palm oil in the world. To create new land for agriculture, large areas of rainforest is legally and even illegally cleared. FAO data confirms that between 1990 and 2005, more than 3 million hectares of palm oil plantations have been planted in Indonesia (FAO, 2008). More than half of these plantations were created by forest clearance. The more mature animals are usually confiscated by officials from people keeping them privately as pets, and then taken to the SOCP. Although it is illegal in Indonesia to kill, catch, keep or sell orangutans, countless animals end up in private houses or on the black market. Many people are still willing to pay a lot of money for a young orangutan.

In order to survive, an orangutan requires several kilos of ripe fruit every day. The good deed is providing the daily ration of fresh fruit for the orangutans living at the SOCP. Local farmers supply the SOCP with sustainably grown melons, figs etc. The aim of the centre is to introduce orangutans, once they have been rehabilitated, into protected areas where there are currently no orangutans living. In the long term, this will ensure the survival of the animals and their habitat.

Many of the orangutans arriving at the SOCP are traumatised and take a long time to rehabilitate. The young have just recently lost their mother, a painful experience for these gentle creatures. Young apes usually spend seven to nine years close to their mother. Some animals refuse to eat and keep away from their fellow apes or from the carers. They require intensive and affectionate care. Many of them were ill-treated while in captivity. Again, in such cases the rehabilitation is a difficult and lengthy process. 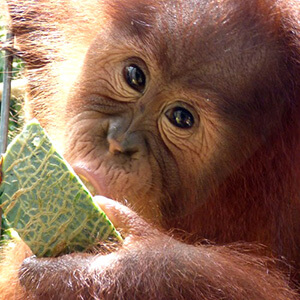 Indonesia is the world's largest island nation, with Sumatra, Java, Borneo, Sulawesi and New Guinea being the main islands. Currently, Indonesia is world leader when it comes to endangered species.