Well-'saffed', everyone! The most important thing when handing out food – apart from the food, of course – is that everybody is in a good mood. That is why we always had music with us when we gave out about 1.000 meals per day to the refugees gathered on the two public squares in Athens in December and January of 2015-6. Accompanied by some nice tunes, we ladle soup and hand out water. The most important word in Arabic that we learned during our first round of Soup&Socks was 'saf'. Translated it means something like 'line' or 'queue'. With a friendly "Saf, saf, saf!" we would bridge the language gap to let everyone know that they all had to queue like everyone else to get their soup, hummus bread and water. Many of the people we encounter have been persevering in the city of Athens for days and weeks, some without shelter or access to proper sanitation. Because of the closed borders along the Balkan route, those not from Syria, Iraq or Afghanistan have been at an impasse since January 2016. They have no choice: They cannot go on, but they also cannot go back.

The team of Soup&Socks prepares hot meals in a mobile soup kitchen and gives these out to refugees.

After seven months we have carried out two missions providing over 40-000 meals to refugees.

Supplying the refugees with meals helps to sustain their health. Personal contact will bring about understanding and trust.

Understanding and trust foster integration of those seeking sanctuary. Our impressions which we communicate will create awareness in Germany.

In 2015, more than 1.1 million people came to Europe by sea in search of safety and a life in dignity. Because of its geographic location, Greece was the main destination for the refugees. According to the UNHCR, 3.700 people, who are presumed to have drowned, were reported missing in this context (UNHCR 2016). Taking care of these refugees in 2017 is something that the Greek government can not handle by itself. Since the closing off of the Balkan route, 50.000 people are stuck here. They live in camps on public squares, exposed to the elements and without access to sanitation (Pro Asyl 2016). But not only the refugees, but also the Greek people are left to face the challenges on their own. According to the European Commission, such conditions on Europe's borders call for immediate action (EU-Commission 2016). So far, the support of these refugees has been taken care of chiefly by volunteers and supporters worldwide.

Soup&Socks is an association of young adults that provide support to refugees at the borders of Europe. In a mobile soup kitchen, we cook hot meals and distribute these, along with clothing, to refugees, but also to people among the local population. With our involvement, we want to send a signal of solidarity in light of disastrous situation at the borders of Europe and give practical support where state structures have failed to provide for everyone. In this way, we contribute to preserving the dignity of the individual persons, to their health, to fostering contact between the locals and the refugees and thus long-term to understanding and integration.

The situation along the borders is in constant flux from day to day. That is particularly challenging when trying to plan ahead. On the ground, dealing with logistics, bureaucratic obstacles and language barriers are the major challenges. The most important tool is always communication – be it in conversation with the refugees, with locals on site or with representatives of the local authorities. Our greatest asset is our highly motivated and creative team as well as the thorough preparations we do. To that end, we link up with other initiatives and collaborate with representatives of the refugees and of the locals. 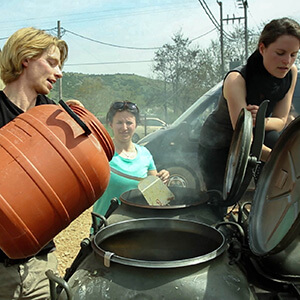 Because of its geographic location, Greece is usually the first European country that refugees come to.