Peru is one of the countries with the highest biodiversity. At least 36 species of monkey are native to the country, including the rare Rio Mayo titi and the yellow-tailed woolly monkey, of which only about 250 animals survive and which is therefore critically endangered. The most severe threat to the monkeys is deforestation: Day by day their habitat continues to shrink because of encroaching agriculture, mining and logging into the rain forest. And these industries bring poachers. Just like in the rest of the Amazon, monkeys in Peru are hunted intensively. Especially the larger species have very little chance of escape from the modern weaponry that poachers are now able to bring even to the remotest corners of their habitats. Younger animals are often left to fend for themselves or kept as pets. While bush meat used to be hunted just for self-sufficiency, hunting for monkeys is now a commercial venture – with the corresponding kill rates. There are areas of forest, where monkeys have disappeared altogether.

Daily care for woolly and spider monkeys in Peru.

At the Ikamaperu rescue centre, orphaned and sick monkeys are cared for.

Number of orphaned woolly and spider monkeys that receive their daily ration of milk and fruit.

Taking care of the monkeys at the rescue centre saves their lives and is an important contribution to the preservation of their species.

Prevent the extinction of these critically endangered woolly and spider monkeys as well as safeguarding the biodiversity in South America.

In 1999, Helene and Carlos Palomino founded the monkey rescue centre Ikamaperu in the northern Amazon, in order to care for orphaned and sick woolly and spider monkeys, and reintroduce them into the wild. All around the rescue centre, hectares of land were purchased, reforested and reconnected to existing forests to allow the monkeys and other wild animals to move between different areas. In the land restoration, mostly fruit trees were planted to provide food for the animals. The orphans raised in the rescue station are then reintroduced to these areas and help to keep the natural environment intact – which is important not only for the monkeys.

The good deed ensures a daily ration of fresh fruit and milk for the monkeys held at the rescue centre. The goal of the centre is to reintroduce their charges back into the wild after a period of rehabilitation. In the long run, this will ensure their survival as a species. 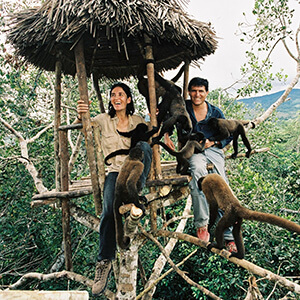 Peru is said to be the country with the greatest number of bird species in the world: more than 1,800 (more than Europe and North America combined).