Nicaragua, the country of lakes and volcanoes, is one of the bio diverse areas anywhere on Earth. Such natural beauty is also the subject of the famous writer and poet Ernesto Cardenal. But he also cautions of the consequences of poverty, population growth and the abuse of power. And, that forests as well as soil and water are being ruined. The Nicaraguan organisation La Cuculmeca has been active against this trend for many years – making it a point to focus on the younger generation. Aracely, one of the guides says about herself: “Looking at the trees and living in the forest calms me down. And at the same time it gives me the energy to keep doing my work. You only conserve what you care about.”

Environmental education for children and young people in Nicaragua to convince them to make a sustainable contribution to saving their environment.

335 school children are given the opportunity to learn about and explore the nature that surrounds them, and to discover the joy of hiking.

The children will have gained an understanding of the significance of the environment and how it all works. They have become active advocates of environmental protection where they live.

The project will result in a greater awareness of sustainable forms of consumption and environmental protection among the newly informed young people in the city of Jinotega.

Nicaragua is already one of the world’s most environmentally threatened regions. Climate change and related extreme events negatively impact the development of the country. In the last 30 years, average temperatures along the Pacific coast and in the north of Nicaragua have risen by between 0.2 and 0.9 degrees, while precipitation for the same region as fallen by six to ten per cent. In recent years, the weather phenomenon ‘El Niño’, which causes severe droughts in the country has been more and more pronounced. On the other hand, poverty, short-term-profit mentality and a lack of environmental awareness have also contributed to Nicaragua having the highest deforestation rates in the world. Between 1990 and 2015, the forest cover has decreased by about one third (FAO, 2015).

You have to know about a thing to cherish and conserve it. The good deed focuses on children and young people to give them an awareness of the environment and sustainable development. The good deed funds the training of volunteer nature guides and the creation of hiking trails that can be explored together with school children. During these nature walks, school children learn more about their environment in a playful manner, they are taught to imitate bird song, count flowers and trees or examine water sources. This is meant to bring forth a new generation of conservationists. 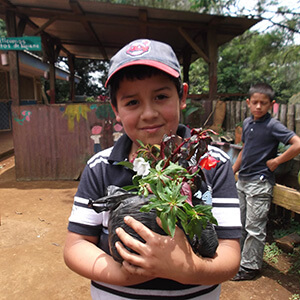 Nicaragua, the country of lakes and volcanoes, is characterised by its wild and tropical nature. It is among the 23 most bio diverse regions in the world.