Support for the monkey orphanage

Medical care of sick chimpanzees in the Democratic Republic of Congo

Coughs, sneezing and sore throat are affliction we humans know too well, especially in the run-up to Christmas and great apes also suffer from such ailments. In animal rescue centres, with animals living so close together, viruses can spread like wildfire. So a bout of flew can quickly affect all of them. At the monkey orphanage J.A.C.K. (the French acronym for “Young animals that have been rescued in Katagana”) and its connected large grounds, there are currently 35 chimpanzees that are hit by an epidemic at least twice per year. Because these primates have a very vulnerable respiratory system, they need care quickly and effectively as not doing so could result in them catching pneumonia, which would be life-threatening. And this is particularly relevant to the youngest of them: Only fast intervention raises their chances of regaining their freedom.

Medication for sick chimpanzees in the monkey orphanage J.A.C.K. in the DRC.

The medicine is bought locally to treat the affected apes at the animal surgery.

Number of (flu) treatments for apes.

The medical treatment prevents the repeated spread of influenza and other life-threatening respiratory illnesses like pneumonia.

Improved health of the chimpanzees increases their chances of reintroduction and protects biodiversity.

According to the International Union for the Conservation of Nature (IUCN), chimpanzees are a highly endangered species and threatened with extinction. At the end of the 20th century there were still more than one million chimpanzees in the world, now there are less than 350,000 animals in the wild (Jane Goodall Institute, 2018). A major threat is the loss of their habitat through deforestation and human settlement. But the main cause is poaching: These strictly protected animals are hunted in large numbers for bushmeat and as a delicacy. Young animals left behind are often traded as pets – and that is also the case in the Democratic Republic of Congo. The monkey orphanage J.A.C.K. is located in Lubumbashi, the capital of th Haut-Katanga province in the southeast of the Democratic Republic of Congo. Since the 1960s, various rebel groups have tried to fight for the independence of the Katanga region from the DRC. This also has to do with natural resources such as cobalt, copper, tin, radium, uranium and diamonds, which are abundant in the region (WDR, 2018). The question of independence and access to natural resources has been the cause of violent conflict for decades. Due to the ongoing conflict, local and international demand, and weak monitoring of government compliance, the trade in monkey meat and monkeys as pets remains a major problem in the DRC despite international agreements and national laws forbidding it (Global Press Journal, 2017). This is why J.A.C.K. is not only committed to caring for the animals, but also to complying with the Convention on International Trade in Endangered Species of Wild Fauna and Flora and to prosecuting the illegal trade in wild animals. Thanks to the initiatives of animal protection programmes and rescue centres, the protection of animals is improving to some extent. The authorities only take action against poaching, confiscate illegally traded chimpanzees and bring them to the rescue centres if there are enough of these and appropriate accommodation for the animals.

With today’s good deed, you are funding one dose of medication for a chimpanzee in the J.A.C.K. rescue centre. Due to the frequent outbreaks of respiratory infections – which sometimes can be severe or chronic – pain-relieving and antipyretic syrups (ibuprofen), cough remedies and vitamin preparations are needed. Animal preparations are not available or unaffordable in the Democratic Republic of Congo, but primates can be treated with human products. From time to time, different medication is needed to treat other emerging diseases. Your donation makes it possible for the animals to receive medical care, to be nurtured and lovingly looked after. This is essential to increase the chances of reintroduction. 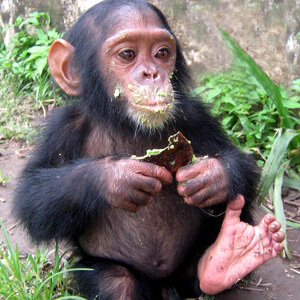 The Democratic Republic of Congo is the second-largest country in Africa and is rich in natural resources. As a result of being in a continued state of war and the increase in population, it is still one of the least developed countries in the world.