A treatment that saves lives

Malaria treatments for children in Sudan

For decades, Sudan has seen hostilities between the official government and rebel groups. The chief victims of the fighting have been the civilian population, who flee their home villages and seek refuge in the caves of the Nuba Mountains, which lie directly on the border with South Sudan. However, a lack of food, low water reserves and poor medical care quickly turn life in the mountains into a struggle for survival. "The longer I am here, the more I realise that we are probably in the most abandoned place on earth," says Kathrin Baumgartner, a physician working in the Nuba Mountains.

Malaria treatment for affected children in the Nuba Mountains

Cap Anamur buys in the medicine and delivers it to the hospital in the Nuba Mountains to allow children to be treated for free.

Number of doses of medicines that are bought and administered.

Treatments for children whose parents are unable to afford them.

Fewer child deaths due to malaria and better overall health.

The Nuba Mountains have long been affected by persistent war. After the independence of South Sudan, the second Sudan War broke out. The rebels of the Sudanese Liberation Army have been fighting against the national government based in the capital Khartoum and demand more co-determination rights and participation of the region and its people. The Sudanese government repeatedly bombs rebel positions and civilian facilities in the Nuba Mountains. Medical care in the Nuba Mountains is difficult and transporting medical supplies to the contested area is a struggle. 20 years ago, a hospital was built in the mountains, which is still in operation today and has been repeatedly extended. With now six outposts within a radius of about 100 kilometres around the hospital, a medical infrastructure for the population has been established. Even today, many people in the region still suffer from malaria. Every year, the medical staff actually see an increase in the incidents of malaria in the Nuba Mountains. Children in particular are affected by this disease. It begins with a high fever, aching limbs and chills and can, if untreated, be fatal. As a result of the long distances and the security situation, the young patients are often admitted when they are already in a life-threatening condition. Last year alone, the hospital staff treated about 74,000 children, 27,314 of whom were admitted with malaria. 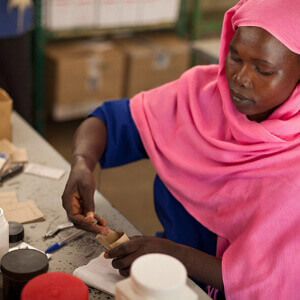 The Nuba Mountains are a region in southern Sudan. The rock formations there provide the local people with a natural shelter from the regular air raids and allow them to seek refuge from the warring parties.