Day 21
16 days of clean biogas for cooking in Nepal

Cows and people working together against climate change

Nepal is the meeting point of two huge continental plates – the Indian and the Eurasian. Together they have not only produced the largest mountain range in the world – the Himalayas – but they also repeatedly cause earthquakes. In spring 2015, there were two particularly strong earthquakes, which reached a total of 7.9 on the Richter scale. The consequences are still clearly visible today. Rural areas in Nepal were particularly hard hit by the damage. The earthquakes also destroyed many of the existing small biogas plants in Nepalese households. They are important for providing households with clean energy, because the dung of one cow is enough to run them and to enable an entire family to cook by exclusively using biogas.

Repairing of biogas plants destroyed by the earthquake to produce renewable biogas and fertiliser for every household.

Procurement of spare parts and commissioning local technicians for repairing the plants.

Number of small biogas plants that could be repaired.

Cooking with biogas from one’s own plant makes households self-sufficient and reduces the financial burden and health risks involved in using fire wood.

The users are more healthy. Local woodlands are protected and climate change is not further exacerbated.

Around 64,000 houses in the Sindhupalchok region were severely damaged by the 2015 earthquake (reliefweb, 2015). Many of the smallholders had invested in a biogas plant before the severe disaster, which made them independent of the fluctuating price of firewood and supplied the household with renewable biogas. Due to a lack of alternatives and the destruction of the plants, the local people are again forced to use collected or purchased firewood for cooking. Since then, wood has been in great demand again and therefore comes at a high price. The families often have to either spend a large part of their income on firewood or spend a lot of time collecting it. The renewed increase in wood consumption leads to deforestation in the region and the burning of wood indoors leads to harmful smoke pollution. The resulting CO2 emissions contribute to global climate change. Problems that had already been solved with the privately operated biogas plants.

Through this good deed, biogas plants in rural Nepal are repaired and put into operation again. The biogas plant produce methane (the biogas) from cow manure, which can be used directly in the kitchen to run a small (bio)-gas stove. The biogas plants reduce a family’s need for wood and the CO2 emissions that would have been produced if firewood had been burned. Taking into account the maintenance costs and the expected lifetime of the plant, the donation will allow a family to cook with clean biogas for 16 days. Biogas is cleaner than burning firewood because it burns efficiently and without soot. This is good for the health of the user. At the end of the process, the cow manure leaves the biogas plant as digested sludge that can be used to fertilise the fields. This can thus also help to increase the production of food and feed on the farm and the earning potential of the farmers. 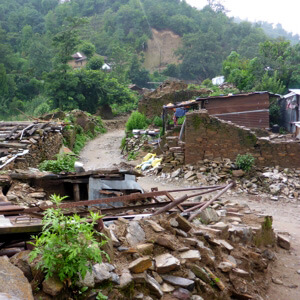 In addition to Mount Everest, the highest peak on Earth, Nepal is home to seven other of the 10 highest peaks. 124 languages and dialects are spoken in the country.