The covering of the pangolin is unique in the animal kingdom: It is made up of large and overlapping scales of keratin – which makes them resemble a pinecone. When they feel threatened, they can roll up into a ball. Sadly, that does not protect them from poachers who are after their scales. These scales are used in traditional Chinese medicine. Also, their meat is sold as an exotic delicacy. The strong demand from both of these sectors has resulted in the pangolin being one of the most illegally traded mammals.

Food for confiscated wild animals in Vietnam that had been rescued from the illegal wildlife trade.

At the rescue centre, the confiscated animals receive a ration of food.

Caring for the confiscated animals helps to protect the stocks in the wild.

The care given makes a later reintroduction possible. This maintains Vietnam’s biodiversity.

Vietnam is within the most biodiverse regions of the world. But poaching and habitat loss pose a threat to the country’s biodiversity. According to the World Conservation Union (IUCN), animals such as the Javan rhino, the kouprey (a species of wild cattle that lived hidden in the rain forest), the Indian hog deer and the Bengal bustard are already critically endangered (IUCN, 2018). For many other animals, stocks have depleted so far that they are in danger of suffering the same fate. In addition to the pangolin, small predators such as leopard cats and mongooses are increasingly caught in the wild in order to sell them on the black market. If the authorities are able to catch wildlife smugglers and impound the illegally caught animals, they are then faced by the challenge of keeping them in a species-appropriate way. Generally, they cannot simply be reintroduced into the wild. It first has to be determined where these animals were caught and if they are free from diseases that they might spread into the wild populations. And so the work of the wildlife rescue centres in Vietnam is crucial to the survival of confiscated animals.

The good deed provides for the care of confiscated wild animals that had been rescued from the illegal wildlife trade. At the rescue centre, the confiscated animals are examined, receive medical care and are nursed back to health until they are fit enough to be reintroduced. In cooperation with the national park authorities, the animals are, whenever possible, reintroduced in protected areas, in order to maintain stocks of these endangered species. Rescuing, caring for and reintroducing the wild animals is intended to maintain Vietnam’s biodiversity and protecting wildlife from poachers. Getting the local population involved generates greater awareness for wildlife conservation and motivates them to a stronger involvement in favour of biodiversity. 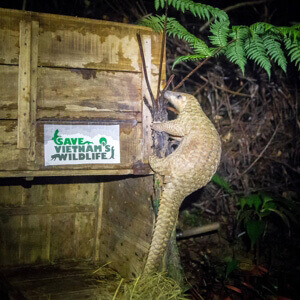 |In northern and southern Vietnam there are river deltas that are linked by a areas of woodland and mountains. This is how Vietnam got the nickname ‘two bamboo rice bowls connected by a bamboo pole’.