Canoeing for clean rivers and oceans!

The salty air, the waves, the endless blue. We humans are fascinated by the sea and by the secrets it holds. We spend dream vacations on the beach, eat local fish and in some countries enjoy the colourful biodiversity under water. But this idyll is threatened. Every year, around eight million tons of plastic waste end up in our oceans (World Economic Forum, 2016). This corresponds to one truckload per minute. The health of seabirds, whales and many other large and small marine creatures is threatened by litter pollution, especially if the animals try to feed on, injure themselves or get entangled in such waste. This is particularly the case with fishing nets, the so-called ghost nets, which aimlessly float in the deep sea. Many animals lose their lives as a result of human garbage. If nothing happens, our oceans could soon become seas of plastic, since many products take several hundred years to degrade. But not only marine organisms are affected by this enormous pollution. Initial studies show that so-called microplastics can already be detected in the human body. Only by acting quickly will we be able to reduce pollution and secure the future of our oceans.

Protection of waterways and marine ecosystems by the reduction of plastic waste pollution.

Organising regular CleanUp events to remove plastic waste from the natural environment and to raise awareness.

Amount of plastic waste (in kilos) that is collected and recycled.

Reducing the pollution of waterways and raising awareness for the problem.

Marine ecosystems are less heavily polluted and there is a new awareness as well as a more sustainable attitude towards natural resources.

In 2016, some 335 million tonnes of plastics were produced worldwide, 60 million tonnes in the EU (Plastics Europe, 2017). Plastic is considered as the material of the 21st century and is a versatile material due to its many properties. But it also has its disadvantages: If plastic gets into the natural environment, it becomes a danger to animals, plants and presumably also to humans. Our oceans and inland waters are particularly affected, as this is where most of the waste that is not properly disposed of ends up. According to the Ellen MacArthur Foundation, by 2050 there will be more plastic in the oceans than fish (World Economic Forum/Ellen Mac Arthur Foundation, 2016). Plastic fragments can already be detected in the stomach contents of over 90 per cent of seabirds today. Approximately one million of them die each year as a result of plastic ingestion or entanglement in flotsam. The same applies to around 100,000 marine mammals and over 800 other species (Wilcox, 2015). In addition to shipping and fishing as the polluters, around 80 per cent of the waste reaches the seas via rivers. In the Danube alone, for example, up to 1,500 tonnes of plastic waste are transported to the Black Sea each year (Lebtron et al., 2017). A large part of this is carelessly discarded packaging and disposable products. In addition to the targeted reduction of pollution, there needs to be a transition in awareness towards greater sustainability and a more responsible use of resources.

Today's good deed will help fund CleanUp events happening throughout Germany on a regular basis. During such events the Clean River Projects team and volunteers go canoeing and actively remove plastic waste from stretches of river. The pollution existing in nature is thus removed by hand. Most volunteers are surprised how much rubbish they find. Afterwards, the found objects are transformed into photographic works of art, which are presented in exhibitions all over Germany. The aim is to raise general awareness of the problem of waste pollution in society, companies and among policy-makers, and to sensitise people to a more conscious approach to waste. In addition, these events offer the opportunity to get involved in environmental protection. By actively cleaning up, educating and sensitising, a long-term transformation can be achieved, leading to positive changes. 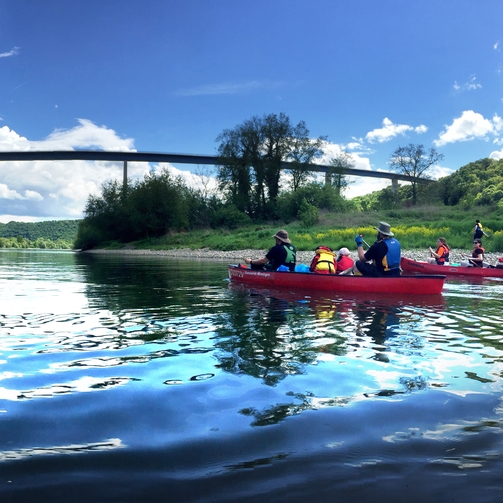 With 24.5 per cent of total consumption, Germany is the largest consumer of plastics in the EU (Platics Europe, 2017). Many rivers as well as the North and Baltic Seas are polluted with plastic waste and numerous waterways contain detectable amounts of micro plastics.