When going to the doctor is a security risk

Medical care for those affected by the war in Ukraine

For more than five years there has been an armed conflict in Eastern Ukraine. From Germany, it would take about a 24 hours’ drive across Europe to get there. Along the line of contact, as the frontline between the pro-Russian armed forces and the Ukrainian army is called, there are about 40 armed engagements per day. Since the beginning of the political and military crisis, the situation in the two provinces of Donesk and Luhansk in the Donbass region has been alarming. The vast majority of the 5.2 million inhabitants suffer from rapidly deteriorating living conditions. Poverty, disease and mental illness are the consequences of this war for the people on either side of the line of contact.

Number of people who have received medical care and counselling.

People are provided with medical care. Treatment covers both chronic and acute illnesses.

The state of health of the people in eastern Ukraine is improved.

In 2013 and 2014, several hundred thousand people in Kiev took to the streets to protest against the government. They demonstrated because the Ukrainian government surprisingly announced that it would not sign the association agreement with the European Union. But the protests were also directed against President Viktor Yanukovych. The people accused him of corruption and demanded his resignation. After Yanukovych escaped, Russian soldiers occupied the Crimean peninsula, which was annexed by Russia shortly afterwards. At the same time, separatists supported by the Russian government proclaimed the self-proclaimed Donetsk and Luhansk republics in the eastern regions. In this context, there were ongoing armed conflicts. At the same time, there were increasingly armed clashes in the eastern regions of Ukraine. Separatists fought for the secession of the two self-proclaimed People's Republics Donetsk and Luhansk from Ukraine. Despite various attempts at settling the dispute, peace has not yet been restored in eastern Ukraine. It is the civilian population in particular that is suffering from the conflict and the unstable security situation. Many houses are damaged and the electricity and gas supply in the regions is unreliable. In general, health care in many parts of Ukraine is actually quite good, but in eastern Ukraine there are not enough doctors to ensure the health care system. Today, more than three million people are still dependent on humanitarian aid. Older people with disabilities are particularly affected by the conflict and the lack of care. Almost 50 per cent of patients in the region's health centres are over 60 years old and the majority are women (Doctors of the World, 2018). For many, the distance to the nearest health facility and thus access to emergency care is an insurmountable obstacle. The majority of the older population suffers from at least one chronic disease. Many cannot afford the necessary medication. In addition to general medical care, many people also need psychological help.

Your good deed enables the medical treatment of one person in the province of Luhansk. Volunteers of the organisation Doctors of the World and medical professionals treat the people locally in 20 different health facilities in two mobile teams of doctors. They receive both general medical and psychological treatment. In addition, teams provide sex education, as violence against women is a recurring problem in the conflict region. If necessary, those affected are also referred to hospitals. If the patients cannot afford this, the organisation Doctors of the World also covers the resulting costs. Prices for medication, in particular, are rising in the region, so that the teams also supply people with medicines. The aim is to improve medical care and help for as many people in need as possible until the armed conflict comes to an end. 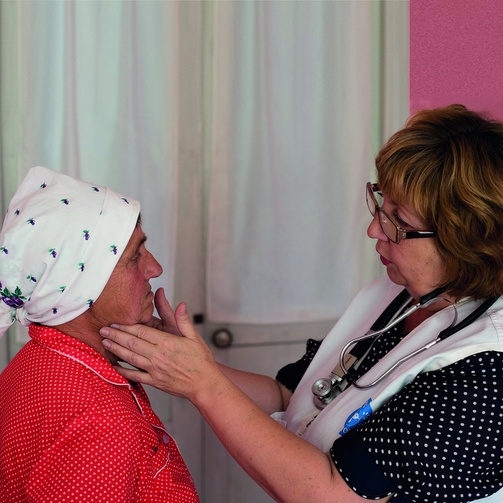 Because of the conflict waging since 2014, Ukraine is the only country in Europe that has seen war in the 21st century.