Play, laughter, just being a child

Help for refugee children in Lebanon

Many refugee children and young people have found a new home in Lebanon – including the nine-year-old Lulu, who fled from Syria to Lebanon a few years ago. However, the negative experiences of war and escape deeply affect many children. Her mother remembers: "The most difficult thing about the flight was that my daughter came to me and told me that she was afraid, and that there was absolutely nothing I could do about it." Lulu's arrival in Lebanon was difficult. At first she did not like to play outside and it was hard for her to find new friends and to integrate into her new surroundings. But through the creative courses in dance, music and art offered to children with a migration background in Lebanon, she met other children who experienced similar things to her. She particularly likes the painting course and comes back every week full of anticipation.

Psychological support for refugee children and young people in Lebanon.

Hosting courses that allow refugee children to deal with their experiences through music, theatre, dance or art.

Number of hours and courses to support children psychologically.

The children can deal with their experiences and strengthen their psychological wellbeing.

Refugee children are allowed to grow up healthily and in safety. They can develop their personality and participate in their new home country.

In 2011, protests against the autocratic government of Bashar al-Assad arose everywhere in Syria. The people demanded democracy and the resignation of their president. Since then, Syria has been in a state of civil war with ongoing armed conflicts. In the confusion of the war, the Islamic State terrorist group also spread to Syria for some time. International powers such as Russia and the US interfered in the war. The participation of different foreign powers such as Russia, the US or Turkey made it more difficult to end the conflict. According to the High Commissioner for Refugees (UNHCR), 5.6 million Syrians have fled abroad and 6.1 million have been internally displaced since the beginning of the civil war in Syria. With Syria having a population of around 21 million, this means that more than half the population has fled since the beginning of the conflict. From the beginning of the Syrian war, Lebanon has taken in the most refugees of any country the world in relation to the total population (European Commission, 2019). But taking in the refugees is a major challenge for a small country like Lebanon (with only about 6 million inhabitants). Even before the arrival of the refugees from Syria, for example, there was already a shortage of available school places. Furthermore, wage levels have fallen in recent years and competition for jobs has intensified. Thus, conflicts and tensions among the population are constantly arising. It is therefore not easy for many refugees from Syria to start a new life in Lebanon. Children in particular are suffering from the situation. Many have experienced terrible things during the war and suffer from these traumatic experiences. In fact, they urgently need comprehensive care.

With today's good deed you enable a refugee child in Lebanon to take part in courses in music, theatre, dance or art. Here they can process their experiences in a playful and creative way, get in touch with other children and confide in people. Trained staff supervises the courses and supports children and young people psychologically. A part of these courses is to check whether the children suffer from psychological stress and how severe it is. If children are already suffering from mental illnesses such as depression or anxiety disorders, psychotherapists will be involved and the children will receive additional treatment. The creative courses bring together Lebanese and refugee children. Reducing prejudices and peaceful coexistence is thus also an essential part of these courses. 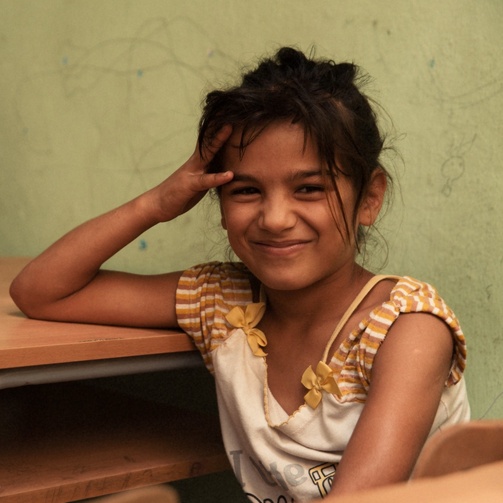 Relative to its population, Lebanon has taken in more refugees than any other country in the world (European Commission, 2019). 70 per cent of them live below the poverty line.