Getting back on your feet with milk

Help for baby elephants in Zambia

In December 2018 an infant elephant, who was later named Lani, came to the elephant orphanage. Her poor state of health suggested that she had been wandering the area alone for some time. The sad story behind it: it is assumed that her family was killed by poachers. The worldwide trade in the precious ivory continues. Many poachers are targeting the tusks of elephants. Like Lani, many baby elephants in Zambia lose their herd and are left to fend for themselves. In the orphanage of the Game Rangers International (GRI), Lani was taken in, given medical care and fed with special milk. If all goes well, she can be re-released into the wild in a few years.

The team at the elephant orphanage prepares special milk fresh on a daily basis and feeds it to the baby elephants.

Amount in litres of special milk that is fed to baby elephants.

The special milk provides the animals with important nutrients and increases their survival prospects.

The elephants are reintroduced into the wild and the African elephant population stabilises.

Until about 100 years ago elephants were widespread on the entire African continent. Today they are in acute danger of extinction. Every year about 20,000 elephants are killed. The poachers are targeting the elephants for their tusks. The population was reduced by 30 per cent in only seven years by the hunt for ivory (Great Elephant Census, 2019). In addition, human activities such as agriculture, settlement, deforestation and the mining of minerals and resources are further reducing the habitat of these animals. The dramatic consequences of these developments are that elephants are now either rare or no longer found in many African countries and the African elephant (Loxodonta africana) is classified as endangered on the Red List of Endangered Species (IUCN, 2019). In 1989, the Washington Convention on International Trade in Endangered Species of Wild Fauna and Flora (CITES) banned international trade in ivory. This decision was then the subject of heated debate. In 1999 and 2008, the trade of stocked or stored tusks was again permitted. Various international rulings call on all states to close their ivory markets. These include resolutions of the European Parliament, the World Conservation Congress of the World Conservation Union (IUCN), the World Species Conference (CITES) and the United Nations. But ivory continues to be traded in Asia and Europe. For example, the EU allows trade in ivory acquired before 1990 (Der Spiegel, 2018). However, checks on the age of ivory are often not possible and certificates are routinely falsified. Ivory is often issued and sold as antique. The survival of African elephants remains in danger.

With today's good deed, you are providing an orphaned elephant with a portion of special milk. The special milk is particularly important for the development of the young animals, in order to increase their chances of survival and to enable the African elephants to survive. In the orphanage, every single animal is cared for and prepared for reintroduction into the wild. In addition to the orphanage that rescues young animals, the GRI team runs various projects for the long-term protection of elephants. These include measures to secure habitats and educational projects for the local population. In addition, action is being taken against the trade in animals and ivory, in close cooperation with the authorities and the population. All projects have one long-term goal: to stabilise the elephant population in order to prevent the extinction of the world's largest land animal. 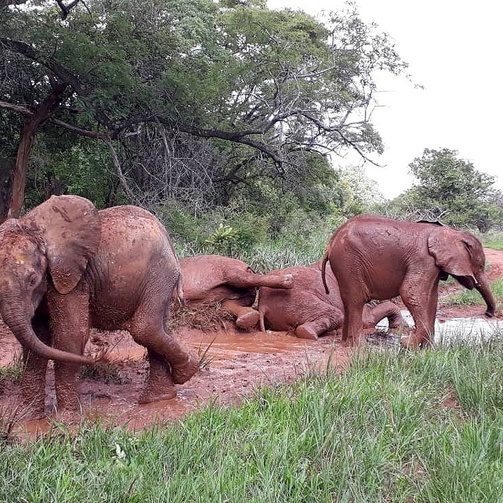 Zambia is a landlocked country in southern Central Africa. The Kafue National Park is not only the oldest and largest in the country, but also the second largest national park in the world.