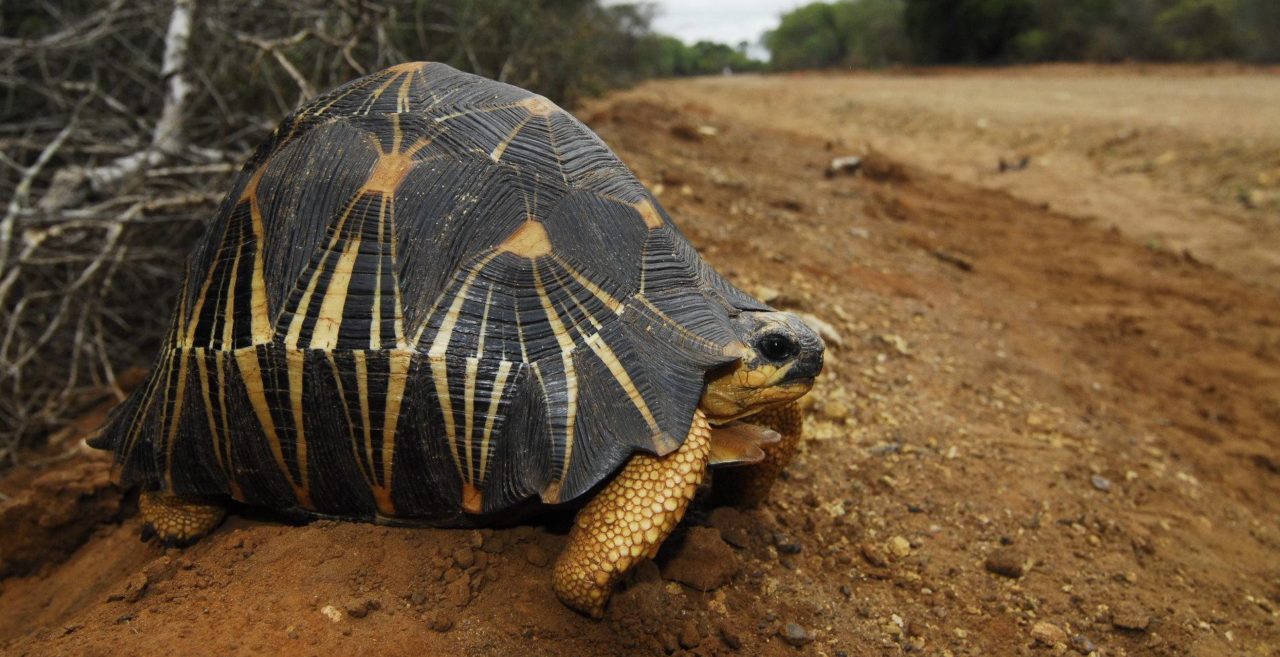 Tortoises on their way back to the wild

At one time, the radiated tortoise lived in harmony with humans in its natural habitat on the island of Madagascar. For the Mahafaly and Antandroy people living there, eating the turtle known as Sokake was taboo. This changed when members of other groups also settled in the region. Weighing up to 20 kilograms, the relatively large tortoises are now part of the daily diet. The animals are caught by the hundreds and taken by truck to other regions, where they are killed for food. The tortoise is also traded illegally internationally - as a delicacy and, due to its shell pattern, also as a sought-after pet. In just under 70 years, the radiated tortoise has disappeared from 40 per cent of its original habitat. It could soon be entirely extinct (Leuteritz & Rioux Paquette, 2008).

Food and medical care for about 25,000 radiated tortoises rescued from the illegal wildlife trade in Madagascar.

The tortoises are cared for in a rescue centre until they can be released back into the wild.

Number of weeks that tortoises can be cared for at the sanctuary.

The rescued tortoises can be reintroduced into the wild and protected from poaching. This stabilises the wild populations.

The surrounding villages are involved in the care and release of the tortoises and are actively engaged in the conservation of Madagascar's biodiversity.

Tortoises and turtles are among the most endangered groups of animals, according to an international study (Stanford et al., 2020). Radiated tortoises, which were originally found only in Madagascar, are listed as threatened with extinction on the Red List of the World Conservation Union IUCN (IUCN, 2008). On the one hand, the habitat of this tortoise is dwindling, and on the other hand, it is falling victim to poaching. This species is highly sought after for its meat and the characteristic markings on its shell. AGA's partner organisation, the Turtle Survival Alliance (TSA), has been campaigning for the protection of radiated tortoises in Madagascar since 2010. Seizures of captive turtles reached a sad peak in 2018, when authorities rescued nearly 18,000 animals (Cannon, 2018). Currently, more than 26,000 rescued radiated tortoises are waiting to be returned to the wild in seven Madagascar sanctuaries (Turtle Survival Alliance, 2021). They are to be gradually released into the wild in ecologically sound group sizes in suitable areas, where they will be protected from poaching. The reintroductions planned for 2020 had to be suspended due to the Covid pandemic and the local restrictions. Then, in August 2021, a first group of 1,000 tortoises could be moved into their natural habitat with special enclosures for release. The animals will of course be cared for until they can be released into the wild. But for the care and feeding of so many animals, the sanctuaries are in urgent need of support.

Your good deed today will help care for confiscated radiated tortoises in Madagascar. It helps to fund a week of care for five rescued animals at the sanctuary. The animals can be examined, medically treated and fed with opuntias, carrots, lettuce and succulents, for example. Together with the local population, suitable areas for reintroduction are identified and the village communities participate in the conservation measures. The cultivation of food plants for the confiscated turtles also gives the surrounding villages of the sanctuaries the opportunity to generate alternative income. In this way, they are sustainably integrated into the conservation measures and benefit from them. By rescuing, caring for and reintroducing the turtles, biodiversity in Madagascar is preserved and wildlife is protected from smuggling.

Madagascar is the fourth largest island in the world and has been separated from the African mainland for about 90 million years. The result of this is a high proportion of endemic animal and plant species, i.e. species that only occur on Madagascar and nowhere else in the world, for example 95 per cent of the 260 reptile species (SimplyScience Foundation, 2021).