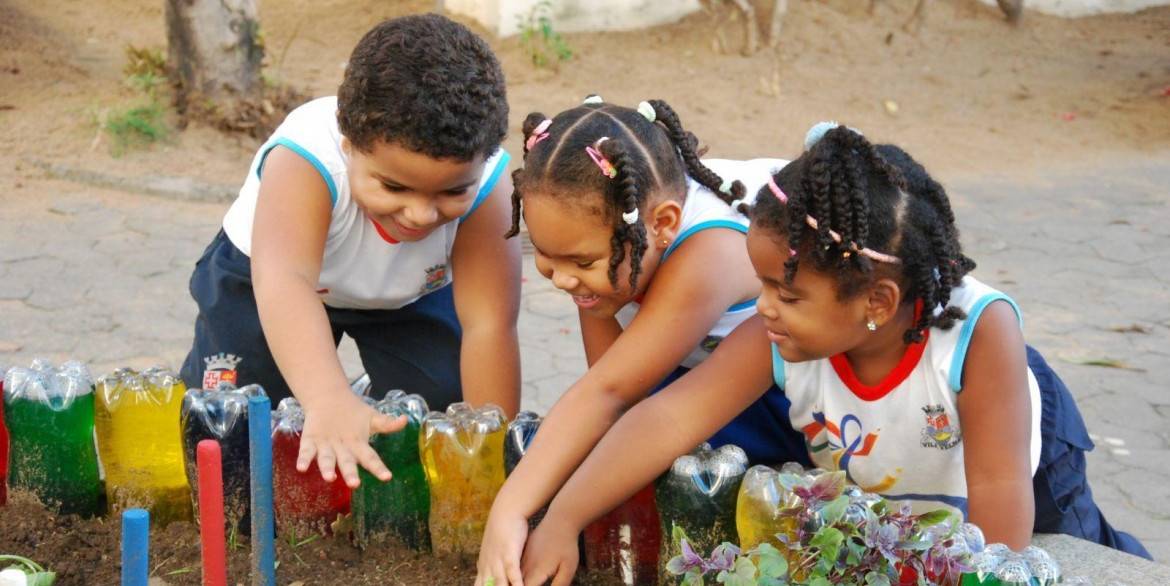 Edible classrooms satisfy both hunger and the thirst for knowledge

Dandara's favourite vegetable is lettuce. Now she would like to have a garden at home, but in 2016 she didn't even know what that was. The six-year-old attends a state school in the poorest district of São Paulo. Dandara's father died early; her mother sells sweets in buses to make a living for her family of five. The poor eat poorly: fruits and vegetables are often missing from the plates of poor families. But even the school lunch usually consists only of beans with rice. What else can be prepared with the 8 cents per child and meal provided by the state (CAISAN, 2016)? With the school garden of CITIES WITHOUT HUNGER, Dandara's school has found a way out. The school meal is now the most delicious and nutritious meal of the day. Together, the children grow carrots, beetroot, cabbage, spinach, bananas, pumpkins and lettuce. As an edible classroom, the garden satisfies hunger and thirst for knowledge at the same time.

School gardens in São Paulo's East Zone for pupils who have little access to wholesome food.

School gardens are established by local NGOs, which also provide practical and organisational support for their maintenance and in teaching.

After about 50 days: The first harvest is ready! 2,900 children get access to fruits and vegetables for every daily school meal.

After one year: The garden becomes self-sustaining and ensures long-term access to sufficient and wholesome food for the children.

After approx. 3 years: Malnutrition and undernourishment are reduced. Environmental and nutrition education are firmly anchored in the everyday lives of children and their families.

The school gardens are being built in the eastern zone of São Paulo, where they are most needed. Being hungry is a "pain", as the people here call it. But people are ashamed to speak of hunger because it points to social inequality. The megacity of São Paulo illustrates this inequality in a sad way: in the eastern zone of the city, the human development index is much lower, at 0.48 to 0.70, than in other parts of the city, where it is high to very high, at 0.80 to 1.00 (GNESD, 2014). The city is characterised by slums, the so-called favelas. An estimated 23 per cent of the city's population live here (HABISP, 2011). In the administrative district of Itaquera in the East Zone, for example, the median household income is the equivalent of around 350 euros (Rede Social, 2012). On average, there are four people in a household (GNESD, 2014). The lower the income, the greater the proportion spent on food and the less fresh fruit and vegetables are consumed. Malnutrition and undernourishment are the result. Schools are obliged to offer at least three meals a day. For this, primary and secondary schools are allocated 30 centavos, or 8 cents, per child and meal (CAISAN, 2016). For this amount, it is almost impossible for schools to offer more than beans and rice.

With your donation today, you will support the school gardens in São Paulo and provide a child with a wholesome meal of vegetables from the school garden for two weeks. CITIES WITHOUT HUNGER uses vacant spaces on school grounds and transforms them into green classrooms to give children in socially deprived regions access to wholesome food. In this way, malnutrition can be counteracted and children's health improved. At the same time, nutrition education is taught to introduce children to healthy habits at an early age. The school gardens are planted together with the pupils and the teaching staff with the help of the local NGO. The NGO provides practical and organisational support for garden maintenance and school garden lessons. There are also lessons on nutrition and environmental education. Particularly disadvantaged pupils can take home harvest surpluses, so that entire families can benefit.

60 per cent of the Amazon, the world's largest forest, is in Brazil. Clouds form here that provide rain to São Paulo and the gardens there. These are also known as "flying rivers". Deforestation destroys this water source (WWF, 2021; BMZ, 2019).