DAY 11:
1 m² of primeval forest will be protected by indigenous people in South India.

Ramesh is a teenager who does not look like the typical forest inhabiting aboriginal called Adivasi in the region. He grew up in the small town of Gudalur and wears jeans. One day a wild elephant appeared near the hospital in a residential area between city and forest. The local Adivasi adapted to the dangerous guest without complaining: no children were playing outside the houses, no loud noises were made and no one tried to chase the elephant away. On the third day Ramesh cut all sugar cane from his family's field and carried it into the woods. His family could have lived for a month of this sugar cane. "The Elephant has got to eat something. If he is being chased, he gets angry. The poor thing simply got lost." Apparently some of the Adivasis' values remained, even though their lifestyle had changed.

Rainforest protection and conservation of a particular culture

Pay off the credit for the purchase of land

Number of m², which is owned by the Adivasi community

Financial independence for the Adivasis. Environmentally sensitive and sustainable lifestyle of young Adivasi generations. Conservation of biodiversity in the ecosystem

The life of the Adivasis is closely connected with the forest. Previously they lived as semi-nomadic, hunter-gatherers in the Nilgiris Mountains. They collected bamboo, firewood, herbs, tubers, fruit and honey. Today the Nilgiris mountains and the life of the Adivasis have changed. Since 1800 large parts of the Nilgiris mountains were cleared for the cultivation of tea, coffee, pepper, teak and eucalyptus. Tea cultivation is the main industry in the region at the moment. To protect the remaining forests the UNESCO proclaimed the area the Nilgiri Biosphere Reserve in 1986. The total forest area is 5,520 km² large and has a particularly rich vegetation. About 5,200 elephants and 535 tigers live here - more than anywhere else in India. Increasingly however, roads and enitre areas like plantations, settlements and tourism facilities are fenced. This prevents the wild animals from roaming freely. As a consequence, there habitat is reduced and there are frequently conflicts between wildlife especially elephants and humans - sometimes with fatal accidents. As natives the 22,000 Adivasis in the Nilgiris mountains have a close relationship with the forest in their traditional life, religion and identity. For hunting, harvesting honey, the beating of bamboo or collecting tubers and herbs, the Adivasis have handed down rules from one generation to another, which has ensured an ecologically sustainable lifestyle so far. However, the Adivasis are minorities and have lost in a large part of the area they formerly populated to plantation owners and families that moved in. Today they mainly work occasionally as day laborers on plantations and construction sites, they are impoverished and can no longer perform their traditional, sustainable forest management practices.

Thanks to today's donations the interest-free loan, which the Adivasi self-help organization used to buy a 70-acre plantation in 1998 for the Adivasis, can be repaid. Responsible body of the plantation is the local Indian NGO ACCORD. The loan was granted by the British charity Charities Advisory Trust. € 301 223 (42.86 ha) are already paid off. 190 777 € (27.14 hectares) of plantation are still waiting to be paid off. Medicinal herbs are located in the forest. Field trips and multi-day children's camps combine modern education with the teaching of traditional knowledge. 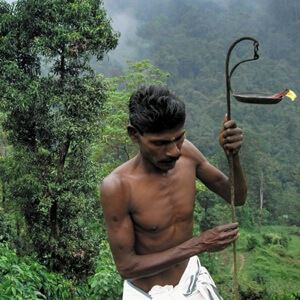 India is the country with the world's highest indigenous population (over 80 million people).

Meets the criteria of the transparent civil society initiative