DAY 10:
A meal and a place for the night for a street child in Rwanda

for street children in Kigali

Dafrosa and Cyprien Rugamba a very committed couple wondered how they could help the children living in the streets of Kigali in Rwanda. Dafrosa often talked with them and they told her that they wished there was a house where they could wash themselves, get a hot meal, retreat and have a family. The Rugambas wanted to build a home like that for the street children, but they were killed in the genocide in 1994, where the ethnical group "Hutus" killed more than 800,000 "Tutsis" and dissident Hutus. In 1998 the second Congo war started and Rwanda got involved into the war. After the war, there were of course many more street children in Kigali. In memory of two great people friends of the Rugambas, set up the project centre in Kigali.

Caring for street children in Rwanda

Food and accommodation for street children

Number of children that can be accommodated in the centre

Number of children that able to go to school again

The reasons why children are stuck onto the streets are very varied. In Rwanda, poverty plays a big role. Two other reasons are the war and the large number of parents with AIDS. Many children have lost their parents and have since ended up on the streets. Others have left their family, because the supply situation in the country is often miserable and they have hoped for a better life in the city. In Kigali, street children have a very low social status. Many people consider them as criminals and unfortunately many children actually turn into criminals after a while living on the street. Many also take cheap drugs, such as glue and solvents.

The center for street children has been built up sucessfully in the last years. The philosophy of the center is, that a meal and the chance to spend a night in peace and security are the first and important steps to show the children that their lifes could be different. However, the aim of the centre is not primarily to feed the children, it is to enable them to attend school, to grow up living a relativly normal life and potentially give them a new home in another family.

Already many of the 1,300 former street children who have been helped by the center Rugamba since 1995, now have completed professional trainings. Four have even completed a university degree. Nevertheless, it is a big challenge to understand the needs and provide opportunities to as many street children as there are in Kigali. 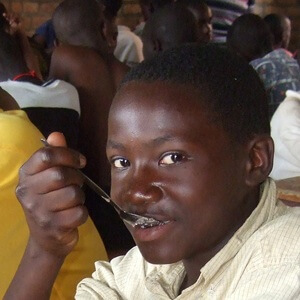 Unlike in many other African countries, there is only one language, Kinyarwanda, which is spoken by all Rwandans. Northwestern Rwanda is the last mountain gorilla habitat in the world