DAY 9:
One music lesson for a child in South Africa

" I feel like I am flying! " said Simnikiwe Nkani, a student of the music academy in Keiskamma after having conducted the Keiskamma ensemble for the first time. Keiskamma Music Academy wants to improve the quality of life and future opportunities for disadvantaged children from rural Hamburg (South Africa) and the surrounding area through music lessons. The students show great interest and talent and their progress is remarkable. Hamburg (not to be confused with the German Hamburg) is a smalltown in the Eastern Cape, where learning opportunities are scarce, especially for musical education.

Number of performances, positive impact on the average grade of students

Improved opportunities for the students. The advanced students have acquired leadership skills and contribute to the changes in their community

The secluded Eastern Cape is a structurally weak and rather poor region in South Africa. The region is rich in natural resources, but suffers from a very poor and underserved educational system that creates an extremely uneven playing field for the children. It reproduces existing inequalities in the population and exacerbates rather than counteracts the existing divide between rich and poor. The division into private and public schools creates a sense of two parallel systems, especially in the rural regions of the country, where the education system is often criticized for being inefficient. Although both the Ministry of Education as well as that of Art and Culture recognized the importance of music and art classes for the cognitive and holistic development of the children. Musical education was severely neglected in the last few decades, mainly due to lack of funding.

Music lessons in childhood promote the development of the brain. Not only does it encourage verbal learning and coordination ability, but also spatial ability and mathematical understanding. Over time, the lessons will also strengthen self-confidence, discipline and the ability to tackle challenges creatively and courageously. This mainly creates positive impact on the school results. Indirectly, it helps students to escape common problems of the secluded area, such as teenage pregnancy, unemployment, alcoholism, HIV infection or school drop-out, since the instruction provides a meaningful alternative to boredom and opens new perspectives.

It is always difficult to secure safe transportation for all the students and instruments. Public taxis are not always reliable, the nearest town is far away, the roads are often poor. Furthermore, the children's social and family problems often need attention. In order to secure continuing education, teachers, volunteers and materials are always needed. Sometimes it's hard to consistently provide adequate funding. 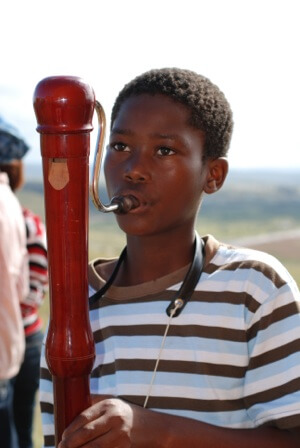 The "rainbow nation" is full of diversity in its nature and people. There are 11 national languages​​.

The association Keiskamma was quite recently founded in Germany, but relies on years of successful work of the South African partner organization Keiskamma Trust