Drinking water supply and wildlife conservation in the Philippines

When the massive typhoon Haiyan destroyed the Philippines in 2013 and took more than 5000 human lives, its extensions also reached the village of Dumarao. Although, even here it rained intensively, there were almost no landslides and no permanent flooding. The largely intact rain forest has protected the village against a catastrophe. It accumulated the water and its roots stabilized the soil. The people of Dumarao know of the importance of the forest for them. It provides them with drinking water, water for agriculture and is likewise habitat for many rare animal species like the forest turtle, which is threatened with extinction. This is why in 2013 they voted in a referendum to protect 400 hectare of rain forest. To save their forest, the inhabitants decided to train five rangers.

Protection of the drinking water source for the inhabitants of Dumarao

Amount of hectar rain forest that can be protected against deforestation

Measurable reduction of the risk of flooding

The illegal deforestation and poaching of threatened wild animals like the forest turtle will be prevented in the protected area around the village of Dumarao. The habitat for humans and animals will be conserved.

Poachers frequently enter the territory around the village of Dumarao. On the one hand they look for rain turtles (Siebenrockiella leytensis) in order to sell them illegally to international zoo traders, on the other hand they illegally fell trees and offer them as timber for furniture and construction in the province. Because of the immense demand and the decreasing resources illegal timber and wild animal trade have increased steadily in the Philippine region of Palawan during recent years (Anda and Tagangay-Baldera 2004). Due to the massive deforestation of rain forests through national and international enterprises a ban on deforestation has been released in the Philippines in 1989. This ban also includes the local population. It is forbidden to keep felling certain kinds of trees, which due to their consistency, longevity, and resistance against termites have been used as construction wood for own needs. However, the Philippine population has increased from 60 million people to 100 million people within the last 30 years (NSO 2010), which brings along increased construction works. For this reason a black market for illegal felled timber has evolved over the years (Orbeta 2004). These illegal activities are fostered by the still widespread extreme poverty among the Philippine population. Around 41,5% of the population live of less than 2 US$ per day, most of them in the rural areas of the country (data.worldbank.org/indicator/SI.POV.2DAY). Only few of them have a regular income while at the same time they have direct access to natural resources. Therefore it is no surprise that it is mainly the rural population itself to exploit its local resources on behalf of illegal timber and zoo animal traders and sell them for a song. The Philippine conservation organization Katala Foundation in cooperation with the customs of Hong Kong was able to track down an illegal turtle trader who illegally purchased 63 forest turtles from the province of Palawan (Schoppe et al. 2013). The animals were brought back from Hong Kong to the Philippines and returned to the wild.

Also in the village of Dumarao several inhabitants have upgraded their income with poaching and illegal turtle trade. This is where the project comes into action. The former poachers and loggers will be trained as rangers who will henceforth contribute to protect the rain forest as intact drinking water source and habitat for threatened animals. In 2013 the first five rangers have been trained. In 2015 an additional five rangers shall receive an officially recognized certificate. About 400 hectare of rain forest around the village will be registered in the index of the environmental agency as officially protected forest area. Therefore it is necessary to register the protected species and establish labels. The inhabitants of the village will draft a rule index stating what kinds of use are permitted in the area. In this way the forest will be protected against illegal activities.

Inhabitants of neighboring communities exacerbate the implementation of the project as their own forests are cleared and they often ignore protection measures of Dumarao. The rangers of Dumarao try to prevent this by conducting information campaigns in their neighbor communities. The planned labels shall call attention to the protected area and keep illegal poachers and loggers away. 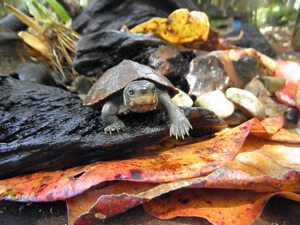 Carpus has no donation seal as the yearly donations do not exceed 10.000 Euro. The association is financing its projects 80% from public funding (such as the Ministry of economic cooperation and development) and private foundations (such as Brot für die Welt or Stiftung Nord-Süd-Brücken) and needs to externalize their finances on a yearly base. In this way Carpus e.V. underlies regular control through funding institutions.