Day 2
One week of pension for a grandmother in Tanzania

One week of pension for a brave grandmother in Tanzania

The Ugandan fishing village Kasensero has a sad reputation: in 1979, AIDS spread here for the first time as an epidemic. Only a few hours of travel further southwards along the coastline of Lake Victoria one crosses the boarder to Tanzania and reaches Nshamba. Also here, there are still many cases of AIDS. On the west coast of Lake Victoria it was long unknown where AIDS is from and how it is passed on. It spread rapidly from village to village and through the fishers across the coasts of Lake Victoria in Uganda, Kenya and Tanzania. Many children have lost their parents to the infection.

Amount of grandmothers who could be secured through a mini-pension

Lake Victoria is also known through the documentary “Darwin’s Nightmare” as in the 50s an invasive species of fish, the tilapia, has been exposed and spread rapidly. It overbalanced the complete ecosystem of the lake. Apart from the ecological catastrophe that is linked with it, however, this species still enables the residents of the lake to fish to a great extent. Therefore it became an important source of income. Nevertheless, this film also shows the social consequences of that intensive fishery. Fishers often live far away from their home villages and prostitution in the coastal areas is flourishing. The usage of condoms is still unpopular and therefore the infection rates of AIDS keep being very high. AIDS stands for Acquired Immune Deficiency Syndrome and depicts a specific combination of symptoms that occur as consequence of the infection with the human immunodeficiency virus HIV. According to the international organization UN-AIDS about 35,4 million people have been HIV positive worldwide in 2012 with about 3,4 million new infections (UN-AIDS, 2012). South of Sahara about 26 million people live with an HIV infection with children being especially affected, as the probability of their parents dying is very high due to bad medical care. As the state social welfare system in Tanzania is not able to care for these orphans, grandparents often take over the responsibility for the children. A little pension means a lot for the grandmothers: “Firstly food! We buy corn and dried fish. If there is something leftover, we buy soap or matches. Or we save money in order to buy clothes for the grandchildren.” Also the attendance of schools is ensured through the regular income. Apart from material survival the project offers space for psychological support and social exchange.

The monthly paying of pensions supports old women who suffer from immediate poverty and hardship. It enables them to age in dignity and they receive an appreciation of their contribution to society. It is the grandmothers who not only give their grandchildren a home, but also commit themselves to facilitate school attendance for these children. The mini-pension concretely helps to care for the families, takes away fears of the future and allows for an improved health care through education and hygienic products. It moreover reduces incriminatory physical work, increases chances for education and offers social integration.

A huge challenge remains the long waiting list – many more old people would depend on such a financial backup. Another huge challenge is the ambition to change political structures in order to implement universal pensions – which means pensions for everyone. In cooperation with local, regional and international partners we lobby to raise attention to this difficulty and exert pressure on the Tanzanian government. 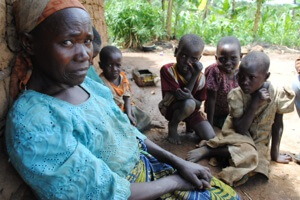 The Kilimanjaro (the hightest mountain in Africa) lies in Tanzania; the oldest human skull was found in Tanzania; Tanzania and Sambia share their national anthem.