Day 22
One medical treatment for a needy person in Nepal

About shamans and Western medicine

Again this stomach pain! Dil Bahadur has to take a break from his work on the field that has been cultivated by his family for generations. The family used to be much bigger and the work load had been shared by all members, but now Dil's daughters are all married and live with their husbands. Dil's son has moved to Katmandu looking for employment. It is not the first time that Dil has had this stomach pain. Often the pain came with a feeling of faintness and diarrhea. Several times the shaman of the village had given Dil some herbs to chew which actually improved his condition. Though, this time they did not help. Maybe he should visit a hospital and explain his symptoms, but the hospital is a day-long trip away. How much would that cost?

Medical care for the poorest in the Amppipal region

Financing the diagnosis and therapy at the Amppipal hospital; enabling treatments in medical camps

Nepal is a tourist destination Around 800,000 visitors have been registered in 2012 (Ghimire, 2013). They are attracted by the century-old cultural sites in the Katmandu Valley and the breathtaking mountains of the Himalayas. Although, only a few Nepalese profit from the tourism industry. A large part of the population still works in agriculture. The youths who don't see any opportunities for themselves in the countryside move to the big cities, especially to Katmandu. Thus, the unemployment rate here is over 40 percent (CIA, World Fact Book, 2013). Many have decided to move abroad, for instance, to Qatar where they work in poor conditions on various construction projects, including preparations for the 2022 FIFA World Cup. Nepal's older generation remains in the countryside and works as subsistent farmers. Access to healthcare is very bad since most doctors prefer positions in Katmandu. On average, there is one doctor to serve 5,000 people (CIA, 2013). The average spending for healthcare was 35 USD per capita in 2012 (Germany: 4,683 USD). 60 percent of the amount have been paid by the patients themselves (WHO, 2013). Since there is no health insurance available to the local population, the necessity of a medical treatment can push a family in financial ruin.

The provision and financing of medical diagnosis and treatment measures in the remote mountain regions represent an important counter weight to the prevalent tendency: hospitals and doctors are all concentrated in Katmandu and other bigger cities in the South of Nepal. Through the donations, the project can expand its pioneer role in the promotion of healthcare away from the urban centers - thus, creating the much needed access to healthcare for the rural population.

A particular challenge are the almost impassable landscapes and the lack of infrastructure in the rural mountain regions. This is the reason why numerous patients have to go on extensive journeys in order to get to a hospital. Nepalmed tackles this problem by carrying out regular medical camps in the remote mountain regions, allowing many people to be treated near their homes. 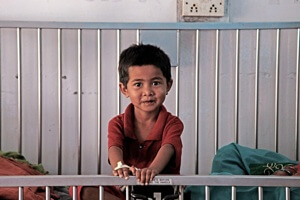 The highest point of the earth lies in Nepal, Mount Everest at 8,848 meters above sea level.