Day 23
One warm meal for a street child in Peru

Going to sleep without hunger!

You are not really poor when you don't have any money, but when you have lost faith in your own future." This is now the slogan of 10-year old Carlos. At 7-years old he left his family out of fear of his abusive father. He then spent his days and nights in downtown Lima, living in constant fear of assaults and abuse. Suffering from hunger and cold, Carlos drugged himself with sniffing glue and alcohol. He begged and stole, washed car windows at junctions, or helped as a porter to earn money for food. One day, Carlos met a street worker from 'Generación'. The street worker invited him to come to a house in San Bartolo in the South of Lima. Initially, Carlos was hesitant but with growing trust, he accepted the offer. He now has faith in his own future.

Food and education for the children living on the street in Lima, Peru

The NGO purchases food for the children's meal. The children live in the house, are supervised, and can attend school. Other extracurricular sports and creativity activities are offered to the children.

Amount of street children who receive a warm meal

The Peruvian society is confronted with the problems of the street children and the support for them is growing.

In Peru, around two million people (total population 30,000,000) live in extreme poverty, i.e. they have an income of less than 1.25 USD a day (UNICEF, 2011). Especially children are affected. A third of the population is under 18-years old and one out of three children have to work in order to contribute to the family income. In doing this, they are often exploited as cheap labor (UNICEF, 2013). Other estimations state that even every second child works (Save the Children, Peru, 2013). The civil war of the 'Shining Path' between 1980 and 2000 orphaned many children. There was a sky rocking increase of abandoned children living on the street (CVR, 2009). People in Peru have somehow become used to the image of abandoned children in the streets. They don't recognize the miserable situation of the children anymore. Because the children disturb the cityscape, they are maltreated and chased away. The Peruvian government cares less about the fate of the street children. The neoliberal economic model of the last decades widened the gap between poor and rich. Poverty and violence in many families has forced children to the streets in the hope for a better life. Here they are constantly exposed to assaults and expulsion. They don't attend school and have to 'struggle along'. To deafen themselves to the trauma, the children sniff glue, drink alcohol, or even use hard drugs. They live in a vicious circle without safety or prospects.

Through the open concept of street work, the project 'Generación' approaches children and youths on the street. A warm meal per day is a good start. At the house in San Bartolo, the children receive shelter, food, and support. They can attend school, catch up on their school diploma, and learn to perform light works, enabling them to one day support themselves. Through the political work, Generación tries to persuade the Peruvian government to assume its responsibility towards the children and the youths. Furthermore, Generación supports the movement of working children who are fighting for their rights to not become victims of exploitation.

The children participate in the program voluntarily. They do not instantly have to give up the life on the street, so that they can live in a closed home. Steadily, the children get used to the new environment and the changes in their life. They experience how their situation improves with small achievements. The life on the street has taught them to solve problems concerning violence. It is difficult to let go of this habit. 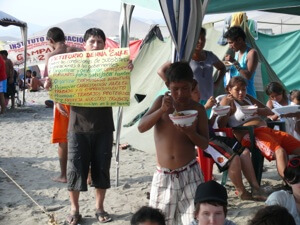 A forth of the glaciers in Peru have melted since 1970. Peru is one of the biggest exporters of silver, zinc, tin, bismuth, lead, and gold in Latin America.