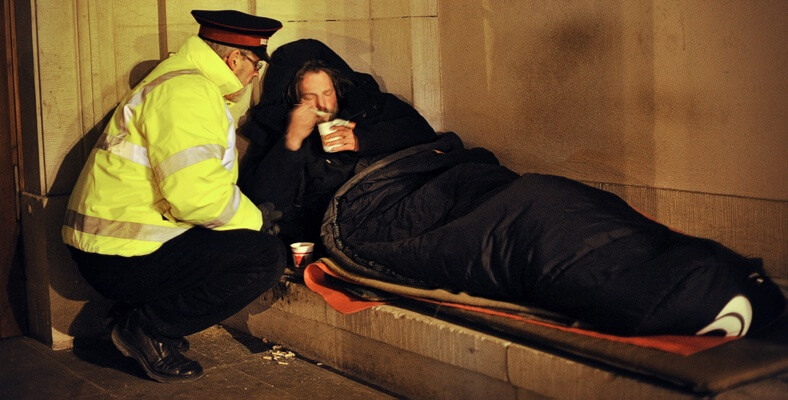 Day 24
One soup and a coffee for a homeless person in Bielefeld, Germany

Homeless assistance of the Heilsarmee in Bielefeld

Reaching out to those standing on the sidelines

Throughout the year, Captain Michael Geymeier of the Heilsarmee is on the road all day with volunteers. Until midnight, the Heilsarmee team is searching for homeless to bring them warm drinks, snacks, and sleeping bags. And to talk to them. During the coldest winter nights, the Heilsarmee also opens a heated community hall for emergency overnight stays. The church leaders, Michael and Sabine Geymeier, are aware of their responsibility: "At such freezing temperatures, it is very dangerous to sleep outside, on park benches, in driveways, or abandoned houses. A degree lower can be fatal." Initially, many homeless persons react surly when they are approached by the Heilsarmee. They don't want to be bothered. But most of the time they accept the hot coffee gratefully. And during freezing nights, they also accept the invitation to come into the warm room.

Meals for the day time shelter, coffee and sleeping bags for the aid patrol, gas for the patrol car.

The Heilsarmee in Bielefeld looks for homeless persons and provides them with coffee, snacks, and sleeping bags. During the day, the day shelter offers meals and social counseling.

Number of homeless persons who receive a soup or a coffee

Measurable improvement of the health condition of the homeless persons

In emergency situations the goal is very simple: no homeless person in a rich country like Germany should die from the cold. Long-term, the Heilsarmee wants to support people in their attempt to get their life back on track.

Deaths from cold in our country?! During the Winter of 2011 to 2012, throughout Europe, around 300 people died from the merciless cold, many of those in Germany. Apart from the short notices in the media, it is difficult to find official numbers. According to the federal working group 'Wohnungslosenhilfe' (Assistance to the Homeless), there are almost 300,000 homeless persons in Germany. Temperatures below zero degree Celsius can cost some of these homeless individuals their lives. For the homeless, the cold winter months are the hardest time of the year. The days are short and the feeling of loneliness or of being excluded increases as people are retreating to their homes. Those who don't have an apartment are often already looking for wind-protected and dry sleeping grounds during the afternoon. Though, it is an illusion that there is any protection or warmth to find on the street. "The worst is when I'm sick.", says one homeless man. The situation then hits him with its entire severity: nobody takes care of him, no food, no medicine, no warm bed.

The aid patrol looking for homeless persons in Bielefeld in order to provide them with warm drinks, snacks, and sleeping bags. Since 2002, the Heilsarmee is offering emergency over night stays. An important aspect of the aid are the conversations with the homeless persons. Finally, they have the feeling that someone not only takes care of them, but also cares.

After some time on the street, many homeless persons just accept their fate and give up on themselves. Often, they also face addiction problems. It takes more than one conversation to convince them that they have to become active in order to change their life. It is necessary to develop a growing connection over time. The trained staff are able to create a high level of trust. The Heilsarmee's approach is characterized by long endurance. 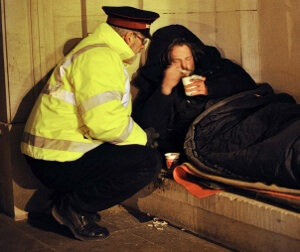 With regard to the GDP, Germany is the largest economy in Europe and the forth-largest worldwide.