Children and teens campaign against HIV/AIDS

If malaria can be transmitted through a mosquito’s bite, why can't HIV? And why is the stitch of a used needle so dangerous? Junito, from the youth organisation AJUPIS, answers these and other questions patiently and clearly. Those who ask the questions are students from a secondary school in Matendene, a suburb of Mozambique's capital city Maputo. The teenagers are in 10th grade, and between 14 and 16 years old. HIV/AIDS is particularly prevalent in the cities, and young people are especially at risk. Nevertheless, AIDS is still a taboo that parents do not discuss with their children and that is rarely addressed in schools. In addition, traditional teaching approaches do not provide much room for discussion. AJUPIS tries to bridge this gap with it's interactive training seminars in schools.

Preventive HIV/AIDS education for children and young people from Matendende, a suburb of Maputo.

The youth organisation AJUPIS organises HIV/AIDS awareness-raising events in schools and the neighbourhood, supported by its dance and drama group.

Number of students who know how to protect themselves against HIV/AIDS.

More students and young people know about HIV/AIDS transmission, prevention and treatment and apply their knowledge.

In the long term, the number of new HIV infections among young people is declining.

The figures speak for themselves: An estimated 15% of the population aged 15 - 49 years in Mozambique is living with HIV or AIDS - 1.6 million people. Women, city dwellers and people living in the southern and central regions of the country are particularly vulnerable to the immune deficiency disease. HIV testing kits or medicine are not available or accessible for everyone, especially in rural areas. Factors that contribute to the spread of HIV/AIDS in Mozambique are: low condom use, high mobility and migration, gender inequality and violence against women and girls. This also affects children and adolescents: about 810.000 children in Mozambique have lost their father, mother or both parents to AIDS. These children and adolescents often have to take care of themselves. They often have to take on the responsibility of doing the housework and looking after siblings. They are forced into adult roles too early - taking away their ability to enjoy a normal, carefree childhood.

Is it possible for a small, voluntary organisation to stop the spread of HIV/AIDS or is it just a mere drop in the ocean? The success of AJUPIS gives reason for optimism: if the activists manage to up-scale their project and therewith expand the reach and intensity of their educational work - the project might have an impact way beyond the suburb. 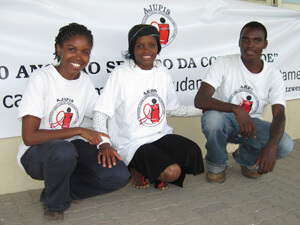 Mozambique is one of the 10 poorest countries in the world. Almost half of the population is younger than age 15.