Though often called koala "bear", this cuddly, fuzzy animal is not a bear at all; it is a marsupial, or pouched mammal. However, unlike kangaroo pouches, which open towards the top, koala pouches are located towards the bottom of their bodies and open outward. Another special characteristic of the koala is that they do not drink much water. Indeed, the name koala is thought to derive from the aboriginal word meaning "no drink", as the creatures feed on and derive much of their moisture needs from the eucalyptus leaves. They are even able to store the leaves in pouches in their cheek. Even though the koala is an iconic symbol of Australia, relatively little is known about this charismatic animal and only few know that they are at risk of extinction.

Food trees and migratory corridors for the endangered koala in Australia.

Volunteers plant native trees and bushes to reforest the habitat of the koala and secure its basic food resource.

Number of trees and bushes that can be planted for the protection of the koala with the donation.

Reforestation of the koala's habitat, sufficient food trees and save migratory corridors.

Increased survival prospects for the koala. They are able to find sufficient food and save migratory corridors. Increased awareness among the population for the protection of the koala.

In Australia, human settlements are increasingly expanding into former bush land, bringing Australians into the immediate vicinity with local wild animals - such as the koala. This has become a serious threat to koalas. Their habitats continue to be destroyed or fragmented, and when they stray from their favoured trees, they are increasingly at risk from being run over by cars or attacked by dogs. Various studies report an alarming decline in koala numbers (EPA, 2007; DERM, 2009; NRMMC, 2009; DERM, 2012; Logan City Council, 2013). Scientific studies of one of the most important koala population in Australia, have found that their numbers decreased by 50% (more than 2.300 animals) in just three years. Similar rates are predicted for other koala population. South East Queensland is one of the fastest growing regions in Australia. More and more land is cleared for urban development. The region already contains several protected areas. However, the habitat of the koala most often lies beyond those protected areas and even within peri-urban areas. Additionally, climate change is another grave threat to the koalas' survival (IUCN, 2009) as they choose most of their food from a few varieties of eucalypt. Shifts in vegetation zones might deprive the koala of its basic food resource.

Solutions have to be found for the coexistence of humans and koalas. The Action Campaign for Endangered Species (AGA) advocates for including private property and urban areas into protection schemes. They are part of the koala's habitat and are used for migration between protected areas. Further, AGA aims to reduce conflict between dogs and koalas though awareness raising campaigns. Many deadly attacks could be prevented by having dogs wear a leash. Above all, together with volunteers, private property owners and school classes, AGA organises tree planting activities in the „Koala Coast“-region. In this way, the koala's habitat can be reforested and migratory corridors can be created. By including the local population in tree planting activities, AGA can raise awareness for a peaceful co-existence with the animal neighbours. Reforestation and new migratory corridors also support the koala in adapting to climate change induced shifts of vegetation zones.

The success of the tree-planting activities depends on local climatic conditions. A lack of rain or sustained periods of drought might have negative effects on the growth of the planted trees and bushes. Therefore, the plantations will be monitored regularly. If necessary, the trees will be irrigated or other necessary means will be taken to help preserve the plantation and therewith the habitat of the koala. 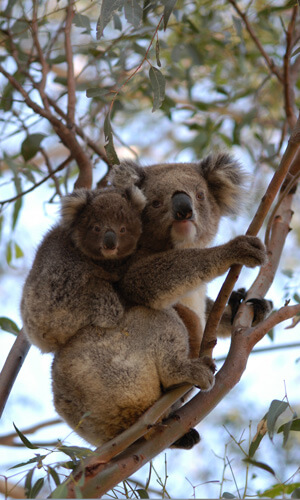 Australia is among the countries with the highest extinction rate in the last two centuries. More than 700 animal and plant species are at risk of extinction.