Sea turtles: ancient marine reptiles that will soon only be seen in museums?

Sea turtles have been crisscrossing the oceans for more than 100 million years. They outlived the dinosaurs and defied continental drift. Perfectly adapted to life in the sea, they are no longer able to withdraw their head and legs – now acting as flippers – into their shell. They also have specialised salt glands through which they excrete a concentrated saline solution, allowing them to regulate the salinity of their blood. Otherwise they would not survive in the salty oceans, where these ancient marine reptiles spend all of their lives. Only for the purpose of digging a nest and laying their eggs do females come ashore. And they are very particular when it comes to choosing their nest site: Females will always return to the same beach where they themselves once hatched. This is the reason why it is so very important to protect these nesting beaches, such as at Watamu in Kenya.

Conservationists protect the sea turtle eggs buried in the sand against poachers and disturbance from tourism-related activities.

Number of eggs in sea turtle nests protected by conservationists.

More nests hatch successfully than previously. This increases the number of sea turtle hatchlings and thus their total numbers.

The chances for the survival of sea turtles go up. Their nesting sites are protected and the local population contributes to that protection.

See turtles are prevalent all over the world and can be found both in coastal waters and out at sea. They spend their entire lives in the ocean. Only for egg laying do the females come ashore. They then return to the sea, leaving the incubation of the eggs to the sun. The use of the beaches by fishermen, and especially by tourists, has reached such a scale that the sea turtles’ nesting activities and successful hatching of the eggs have been negatively affected, endangering the survival of these marine reptiles (IUCN, 2004). Many hatching beaches are being threatened or destroyed because of road building or hotel blocks. Artificial light from hotels or street lights irritate the female turtles in their way up the beach to lay their eggs. People walking along the beach or having a party also disturb or frighten away the animals. Beach chairs, sunshades and other objects can often be unsurmountable obstacles to sea turtles. If they cannot find a way up the beach, the turtles will turn around and go back to sea, whereupon it may happen that they lay their eggs in open water and that those will then get lost. In some parts of the world, sea turtle eggs are deliberately dug up by poachers and sold on the black market as a delicacy (IUCN, 2008). In Watamu, newly laid nests will also fall victim to poachers.

This good deed will protect the eggs of sea turtles in their nests on the beach of Watamu in Kenya. Even as the eggs are being deposited, beach patrols are there to ensure that the sea turtles can lay their clutches without being disturbed. Until they hatch, the nests are protected from poachers and tourism-related activities. If a nest is in an area highly frequented by tourists, it will be relocated to a safe part of the beach. Also, the nesting season is being monitored, taking account of egg deposition and successful hatchings. To foster these animals' long-term conservation, both tourists and locals are given information on what threatens sea turtles and how to behave near nesting beaches.

A major challenge in implementing this good deed is finding the nest once the eggs have been laid. Sea turtles lay their eggs into a depression in the sand that they excavate with their back flippers. After laying the eggs, the turtle covers the nest with sand. With the front flippers, the turtle tosses loose sand back and so disguises the nest. By the time the tutle has crawled back to the sea, only the tracks will indicate where the nest is. Some time later, even these tracks will be lost. This is why the beach patrols go out just after sunrise looking for sea turtle traces in the sand, which allows these skilled conservationists to successfully find the nests and record their location. 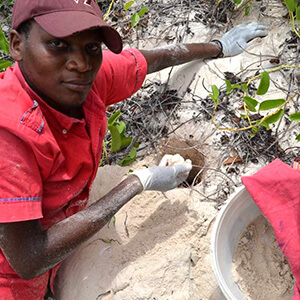 More than 40 ethnic groups with over 50 different languages and dialects live in Kenya. The official languages are Swahili and English.