Day 11
School supplies are provided for one child in Haiti

Education as an unshakeble foundation

Lack of education for children in Haiti’s slums

A Haitian proverb says: 'Many hands make light work'. After a severe earth quake suddenly destroyed large parts of the country in January 2010, the eyes of the world were looking at Haiti. Emergency aid from the international community and the active participation of numerous relief workers helped to put up tent cities and distribute water and food in all affected areas. Medical emergency care was also made available quickly. Thanks to an impressive sense of community, Haiti is recovering from this severe natural disaster. New hope contributes to rebuilding houses and everyday life slowly but surely comes together. But the poor population is not content to just go back to the old and precarious ways. It sees the destruction as an opportunity for creating something new and better. Together with experts from various NGOs, the current state of affairs in the communities is analysed, shortcomings exposed and solutions worked out. The people take their fate into their own hands and push for change. Poor people in particular have no access to education. By rapidly rebuilding schools and offering free classes for the children, the people hope to improve their educational outlook. The level of schooling is to be improved permanently, giving the part of the Haitian population living in poverty a way out of it and into a secure future.

Better educational opportunities for the children of the towns of La Digue, Royal and La Hatt in Haiti.

TECHO Haiti's team provides the municipalities with writing materials for the pupils as well as black boards and school books.

A total of 290 pupils own writing materials and the schools have new black boards and new school books for teaching.

As a result of the improved learning environment, the level of teaching is significantly improved and a higher number of pupils finish elementary school.

The young people of these three communities attain a higher level of education, allowing them to take their community a long way on the road out of poverty.

More than half of Haitians, 57 % to be precise, are under 25 (UN 2014). Nonetheless, the government has for decades not been able to give adequate support to the young. For that reason, about 39 % of the Haitian population are illiterate to this day (CIA 2016). So far, the education system is mostly privatised and thus open only to a small wealthy part of the population. Haiti has been suffering from economic problems for a long time, but the heavy earthquake in 2010 struck another blow to the country and caused an extreme crisis. Also, the majority of schools and universities was destroyed (Beauvoir 2010). This adverse situation is now to be remedied. The current administration now wants to make school tuition-free for all children, thus allowing them to be educated (Auswärtiges Amt 2016). To that end, young Haitians who have for a long time been excluded from getting involved in their own country, want to provide the necessary infrastructure. Many projects are being established that are often also supported by non-profit organisations. An example is the collaboration between the municipalities of La Digue, Royal and La Hatt with TECHO Haiti. Schools and education institutes are being and will be jointly re-established and run in the long term within the communities. Creating opportunities, combining forces and bringing forth dedicated projects, allows Haiti's youth to now take the driving seat in their own country.

TECHO Haiti intends to supply three Haitian communities with the basic school supplies they need. Every pupil between 7 and 14 years old will be given an exercise book and a pen for their school career, and the remaining funds will be used to refurbish the class rooms with school books and black boards. By these simple means, the quality of teaching and the level of education can be improved significantly. These new educational ladders and bridges are an important step for the community – out of poverty and into a self-determined life.

Our plan to supply educational projects in Haiti with school material over the long term is based on a certain amount of infrastructure already pre-existing, that provides schooling to the children and young people of the community. That is why we support the rebuilding in the schools of Kriswa and Bonberger in La Digue as well as other schools in Royal La Hatt where there already are teaching structures. 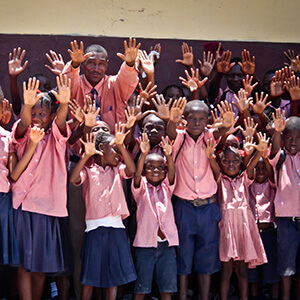