Day 12
One meal for a student refugee in Northern Iraq

University degrees made possible by a balanced diet

Lunch for students in Kirkuk and Sulaimanyya

Yasmin* has been living in Syria with her family, studying medicine. University meant a lot to Yasmin, but as a result of the war, she had to give up her studies and flee with her family. They found refuge in Sulaimaniyya, a university town in northern Iraq. The Chaldean Church of Kirkuk and Sulaimaniyya made it possible for her to continue her education and have been supporting her and her family since they have arrived there. They were given permission to leave for France and start a life in safety there. Although Yasmin was tempted to go to France, it quickly became clear to her that she would remain in Sulaimaniyya to continue and finish her studies. Now she is happy to be back in a daily routine and looks forward to being a doctor in the future. Just like Yasmin, 299 other refugee students are currently being supported by TERRA TECH and the Chaldean Church. *name changed

Lunch for 300 students from refugee families at the university canteens in Kirkuk and Sulaimaniyya.

Every day, the students get a fresh and nourishing meal at the university canteens.

Number of meals given out to students.

The students have some structure in their everyday lives, they have become integrated and a part of the community. They graduate successfully.

The war in Syria and the flaring conflicts in Iraq are particularly hard on the civilian population. It is estimated that about 15 million people from the region had to flee, many to northern Iraq. As in any crisis, some suffer particularly, such as the sick, the elderly and people with disabilities. In northern Iraq, that includes one other group: young people who had been in the middle of vocational training courses or studying at university. To them, seeking refuge means giving up their studies, losing access to education and a lack of prospects. This is not a situation that makes settling down somewhere easier, but – quite the opposite – encourages further migration. Emergency aid, providing food and shelter, is simply not enough. Support that specifically targets the continuation of academic education allows the students to build a future for themselves.

The 300 students are already back to studying in Kirkuk and Sulaimaniyya and rely on the support. They have been through bad times and are looking forward to a normal student life. Often they spend the entire day at university, and the daily lunch at the canteen provide some structure to their lives. At the same time, sharing a meal brings students of different origins, genders and ages together. And studying on a full stomach is much easier.

Giving support to one group may cause envy in another. That is why we support students regardless of their religious or ethnic origins: learning together eases tensions and creates a sense of community. Another problem arises from the high number of refugees and people in need. It is obvious that support will be required over a number of years, but already a reduction in the willingness to make donations can be observed. We try to respond to this fact by stepping up publicity and using new channels (of information). 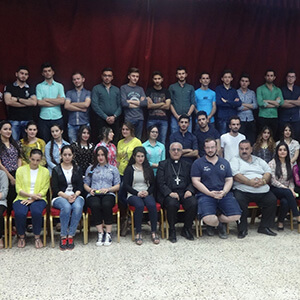 In northern Iraq, about 15 million people are currently displaced and depend on humanitarian aid.