Day 20
A breakfast for ten kindergarteners in Nepal

Malnutrition of infants in Nepal

Where can we find work today? Every morning, 21-year-old Samila and her husband try to get hired on a building site for a day's wage. Like many of the poor in Nepal's capital Kathmandu, they carry rocks, sand or cement. But at least they know that their son Suman, one and a half years old, is well cared for. Every morning, Samila takes him to the toddlers' group run by the women's network Chhimeki ("neighbourhood" in English). The network is made up of neighbourhood women volunteers that support poor women and families. They have among others founded five toddlers's groups where more than 150 children under three are supervised and cared for. Suman was undernourished when he joined the group. Everyone is proud that now he already weighs 7.7 kilograms. But he is still far from the weight appropriate for his age.

Regular meals and supervision for children in Kathmandu.

Every day, more than 150 children are cared for in toddlers' groups.

After about a year, most children are back to their normal weight.

After two and a half years, the children have a solid and healthy constitution and are ready for the state schools.

In the long run, the health of the children and thus their learning ability will have improved in the neighbourhoods where Chhimeki is involved.

Nepal was long seen as a paradise in the shadows of the mountains; as a Hindu kingdom on the roof of the world. But behind the exoticism, the resentment of the poor and disenfranchised was festering. In the 1990s, this exploded into a bloody civil war. For 10 years, Maoist rebels fought the royal army, 12.000 people lost their lives. The conflict uprooted hundreds of thousands and drove them into the slums of the cities, where many of them still live. In 2006, fighting ceased after the king was deposed and a republic declared. But political power struggles and conflicts between the different parties continue to hinder the development of the country. Two powerful earthquakes in late April and early May 2015 have further aggravated the situation: 9.000 people died, over half a million were made homeless. This makes Chhimeki's neighbourhood engagement in the slums of Kathmandu even more important.

More than 150 children are supervised in the five toddlers' groups set up by Chhimeki. Here they are given three meals a day and clean water to drink. They playfully build social connections and can find rest during an after-lunch nap. Learning to wash their hands before every meal and after going to the toilet helps to teach them the importance of hygiene. Further, the children are weighed on a regular basis to keep track of their weight. A medical check up is also part of Chhimeki's programme. The mothers can be at ease while looking for work, knowing that their child is well cared for. And 20 women found a job as carers.

Chhimeki's most important function is to keep convincing the mothers that coming to the toddlers' group is very important for the healthy development of their child. That is not always easy: they are young, often single mothers and the daily struggle for survival takes its toll. Under such circumstances, the children are often neglected. In regular home visits, the women of Chhimeki try to make a connection with these mothers, help them to cope with their depression and that way also strengthen the bond with their children. 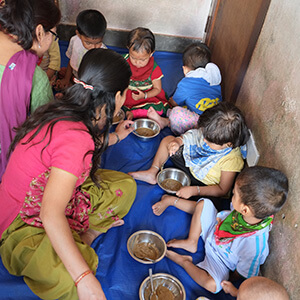 Nepal is the country with the highest mountains in the world. Eight of the 14 peaks over 8,000 metres are in Nepal or along the border with Tibet/China.