A young mother with her three-year-old child escaped from Burundi's capitol across the border to the Congo. Afraid for her life, together with other families she set off because government militias were hunting for anyone suspected of being in opposition to Burundi's president. Now she and over 15.000 other Burundian refugees live in a camp near the border at Lusenda established by the United Nations High Commissioner for Refugees (UNHCR). The two of them should be safe now and better off than a few months ago when they had to survive in temporary straw huts. But her child is suffering from cholera and is in a serious condition. This infectious disease most effects areas with an insufficient supply of drinking water and hygiene conditions – especially bad hand hygiene. This disease can be fatal if the infant is not treated for the severe diarrhoea it suffers. At risk are undernourished and weak people, children and the elderly in particular. Washing hands regularly and thoroughly can prevent infectious diseases and reduce the risk of getting sick.

action medeor buys soap at a local market in the Congo and hands it out to refugees as part of information events on hygiene.

Number of refugees who have received a bar of soap.

Refugees are able to wash their hands on a regular basis and can thereby reduce the risk of catching waterborne diseases.

Reduction of waterborne diseases through better hygiene conditions and in the long-term a better understanding of health issues.

Since April 2015, Burundi in East Africa has seen severe unrest because of protests against President Pierre Nkurunziza. The ruling party nominated him for a third term, which is in violation to the constitution. In July, the election was held in spite of the protests and international criticism. Even though there was a boycott by the opposition, he won almost 70 % of the votes. The situation in the country is uncertain and tense. Thousands of people are fleeing to neighbouring countries DRC and Tanzania. According to the UNHCR, more than 15.000 refugees live in the eastern DRC. The actual figure is probably much higher, because the border region is said to be confusing. There are an estimated 5.000 additional people. At the beginning of the crisis the temporary camp in Lusenda just had a few makeshift straw huts. The people drank the dirty water from the nearby river, which also was a breeding ground for malaria-transmitting mosquitos. Alongside malaria, cholera and diarrhoea are rife, mostly among children, pregnant women and the elderly. The United Nations established an official refugee camp made of tents instead of straw huts. Nevertheless, hygiene conditions continue to be very bad.

Together with their local partner AFPDE, action medeor hand out soap to the refugees. Along with the distribution of soap, information on hygiene measures is an important part of the emergency aid project. Its goal is to reduce and ultimately prevent hygiene-related illnesses such as diarrhoea, cholera and gastro-intestinal infections. Washing hands with soap regularly is the most effective and an inexpensive way of avoiding waterborne diseases.

A major challenge will be the fair distribution of the soap. The amount of soap depends on the number of persons per household. As with the distribution of food, careful planning is needed in order to get a better understanding of the family situation. 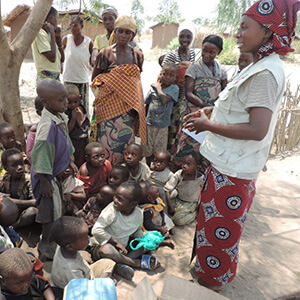