Planting a future for young Mongolians

Khaliun Sum in Mongolia is surrounded by the 3.000 metre peaks of the Altai Mountains. The area consists of sparse grasslands and desert steppes. Only very little vegetation can thrive here. The cattle of the nomad herdsmen are also finding it increasingly hard to cope under these harsh conditions. Here too, climate change is having an effect in that winters are getting colder, summers are short and hot and drought is increasing. Even though the climatic conditions are deteriorating, the herds are growing, along with increasing overgrazing. The young people of these nomad families can no longer live just off the proceeds of the nomadic economy, as was traditionally the case, and need other options for income generation. The STEPPENKIND initiative supports young people in planting sea buckthorn bushes. Sea buckthorn is a new source of income, because it is in demand all over the world and can be processed into a variety of products. Sea buckthorn grows even under the extreme climatic conditions of the Mongolian steppe and can also counteract desertification.

Employment and income for young Mongolians in Khaliun Sum.

5.000 buckthorn seedlings were planted, irrigated, maintained and their growth monitored. 2 gardeners were paid a monthly wage.

Managing the buckthorn plantation creates employment and income for 2 to 4 gardeners. The top soil is kept moist and is protected against erosion.

Young people are offered alternatives to secure their livelihood in their native region. They are no longer forced to leave their home and family.

Until about 1930, before the era of Communist collectivisation, nomads used to migrate over vast distances to allow their animals to find fresh pastures. After the collapse of the Socialist centralised economy in 1990, the herdsmen were left to their own devices. Unfortunately, the skills and knowledge that had served them so well over centuries had now mostly been lost during the years of dependence on the state. The amount of livestock was increased, with no regard for the soil conditions, in order to feed growing families. This, in turn, contributed to overgrazing, e.g. because of too many cashmere goats. The consequences of the free market and globalisation – e.g. falling prices for livestock products – also resulted in reduced income. Furthermore, climate change contributes to the further impoverishment of the nomads in the sparse Altai region and in other regions of Mongolia. Because young people no longer see a future for themselves in their native region, they migrate to the capitol of Ulaanbaatar and are deeply disappointed when they get there: here there is also high unemployment. They often turn to alcohol in search of consolation. Alternatives to livestock herding are urgently needed.

Extreme climate conditions such as drought, frost and high winds are a major challenge. Irrigation channels that periodically carry water have been dug, shrubs act as wind breaks and keep the herds away from the plantation. 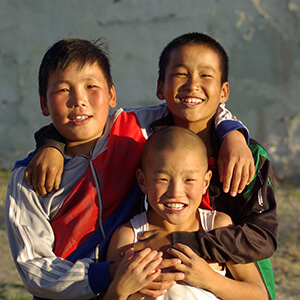 With 1.73 people per square kilometre, Mongolia is extremely sparsely populated. In the remote western and southern provinces it is even less (under 1.5).