The chicken came before the egg

What – other than peanut sauce – do you know that is from South Sudan? Most people know very little about the newest country on Earth, which has been ravaged by civil war for two years now. More than 1.5 million people are internal refugees and another 760.000 have migrated to the surrounding countries – for instance to the world's largest refugee camp Dahab in Kenia that holds 350.000 people. Many have also embarked on the dangerous route to Europe, hoping to be able to find peace and dignity there. A major reason why many people flee the country is insufficient food security: warring troops have destroyed fields and harvests and in many areas, famine is either imminent or has already struck (IPC 2016). Veterinarians without Borders is supporting local people in bolstering their livelihoods and thus prevent them from suffering from hunger. The association provides chickens to the needy – refugee smallholders and herdsmen in particular – and also offers trainings in keeping poultry. Selling the eggs, the meat and chickens at local markets allows the families to generate additional income.

VSF raises chicks, vaccinates them and, once fully grown, distributes them to women in need.

Number of chickens that have been vaccinated against diseases & number of households having been provided with 7 chickens.

Compared to the beginning of the civil war, it is expected that approx. 6.000 households will have improved nutrition.

The reasons for the conflict in South Sudan that has been raging for the last two years are many-facetted and complex: the failure of the rulers to build a working state, smouldering rivalries between various clans, North Sudanese interference and a population traumatised by decades of civil war between North and South Sudan that has hardly known peace. All these are parts of the picture of this fragmenting country. The county of Gogrial East is directly at the Sudanese border and has to cope with a large number of internally displaced persons and returning refugees. The problem for the returnees is that they neither own cattle nor have claims to any land. Livestock and agriculture, however, are the livelihood of these semi-nomadic smallholders in the region. This is how they produce food for their own consumption and products they can sell at the local markets. This situation is aggravated by the fact that the conflict among the Dinka clans have created additional waves of internally displaced persons from other regions in South Sudan, who are also seeking refuge in these communities. They depend on being able to build a new livelihood, but they compete with the locals for the limited resources.

Vétérinaraire Sans Frontières (VSF) raise young chickens, take care of their veterinary needs (i.e. vaccinations) and then distribute them to women in particular need (widows, pregnant women, single mothers, those with many children, the elderly, internally displaced persons). With their eggs and meat, the chickens provide these women and their children with vital protein. Also, in contrast to larger livestock, women can be in sole charge of smaller animals, without requiring the consent of a male head of household. That allows them to, for example, take the products to the market and use the proceeds to meet different needs.

Among the major challenges in a civil war are safe access to the people in need as well as the safety of the aid workers. VSF works together with local people who know their area of operation well and are able to assess dangerous situations. Further, this avoids any cultural or language barriers and makes building trust easier. 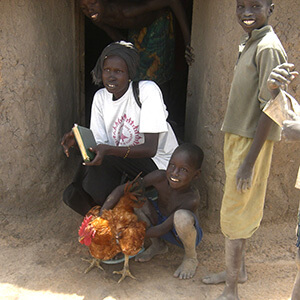 Since its independence from Sudan in 2011, South Sudan is the youngest country of the world. South Sudan has over 60 indigenous languages.