Three pricks to save a life

Health care in the landfill settlements of Cebu City

After Metro Manila, Cebu City is the second largest metropolitan area in the Philippines and is the site of the most important cargo port. As a key centre of trade, Cebu City attracts the poor peasants from the surrounding islands, drawn into the city in the hope of finding work. But sadly, these hopes are often dashed because those seeking work rarely have any qualifications. And so they and their families end up in one of the many slums and land-fill settlements on the margins of the city. There they sift through garbage, looking for anything of value that can be sold. The hygienic conditions in these settlements are extremely hazardous. Without good shoes or protective gloves, children and adults alike get injured while collecting recyclables and get infected with tetanus. Without immunisation by vaccination, such an infection can often be lethal.

Tetanus vaccination for children and young people in Cebu City.

Number of children and young people with basic immunisation against tetanus.

There is a large poverty gap in the Philippines. The ten richest families together own 56.2 % of shares. 6 % of families control 60 % of the agricultural land. Thus a vast proportion of the population owns no or very little land. 70 % of the rural population have to live on less than one dollar per day. According to UNICEF, the Philippines are among the ten countries with the highest number of malnourished children under five years old. Because of the extreme poverty in rural areas, more and more families are migrating to the urban cetres in the hope of finding a better livelihood. Once there, they settle in slums (a quarter of Manila’s population alone live in slums) and work as day labourers or as rubbish collectors. Over 18 % of these families depend for their survival on the labour of their children. Even though school tuition in free in the Philippines, many families cannot get by without the work of their children, as that would mean losing ‘co-breadwinners’.

German Doctors provides health care at 17 places in slums, chosen based on the precarious living conditions of their people. The team consisting of a driver, a doctor, a (female) pharmacist and an interpreter takes care of 60 to 80 patients and provides them with medications. About half of them are children and young people. These, if needed, are given three tetanus jabs to vaccinate them against this dangerous infectious disease. Malnutrition and extremely unhygienic living conditions make children and young people particularly susceptible to infections of all kinds.

The greatest challenge when it comes to implementing this good deed is gathering sufficient funding to buy the necessary medications (vaccines) as well as medical material (syringes etc.). Because an infrastructure already exists via the rolling surgery of the German Doctors, the good deed actually funds the additional medications and the vaccines. 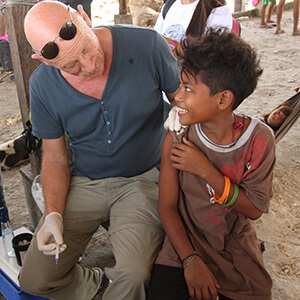 The Philippines are an archipelago of 7.107 islands, 880 inhabited. Only 11 are larger than 2.500 square kilometres. 20 active volcanoes and to the east of the archipelago at 10.540 metres one of the deepest sea trenches on earth.