Beans for a better life

The Germans are not just world champions at football; when it comes to eating chocolate, they are also in the Premier League. About nine kilograms of chocolate is eaten per capita in Germany. Especially December 6th calls for a chocolate St. Nicholas in every boot. But under what conditions were the cocoa beans cultivated that end up in this chocolate treat? Sadly, the cultivation of cocoa rarely helps to give the farmers that cultivate it a better live. Child labour and harsh working conditions are the norm among producers that exclusively cultivate cocoa. In El Salvador, on the slopes of San Miguel volcano, INKOTA supports a project that takes a different path: smallholder farmers cultivate cocoa alongside their staple crops like fruits and vegetables. They can then either use the cocoa to meet their own demand or sell it to cover necessary expenses. Their nutritional needs are still met – but the additional income is a crucial step towards getting out of poverty. On top of this, cultivating cocoa brings great ecological benefit: the trees improve the micro-climate, re-forestation raises the water table and prevents soil erosion.

Cocoa plants and trainings for smallholder farmers in El Salvador.

The local NGO OIKOS provides smallholder farmers around San Miguel Volcano with cocoa plants and trains them in their cultivation, which they then implement competently.

Number of smallholder families that have each planted 30 cocoa trees and thus contributed to the re-forestation around San Miguel Volcano.

The smallholders harvest the cocoa beans and generate a small income. The cocoa trees improve the micro climate and reduce soil erosion.

The income from cocoa cultivation reduces poverty among smallholder families. They have money to e.g. pay for food and tuition.

Being poor and living on the slopes of a massive volcano makes one vulnerable in a number of ways: in heavy rain, torrents of water exacerbate soil erosion and create the risk of mud slides. Sometimes entire harvests are destroyed. Even if people lose just a part of their harvest, what remains is often not sufficient to feed their families, resulting in the danger of famine. This twofold risk is what the project aims to tackle: by cultivating cocoa, the smallholders gain a source of income that is less susceptible to weather fluctuations. Simultaneously, the re-forestation component improves the environmental situation on San Miguel Volcano. So this endeavour aims at reducing both the ecological and the social vulnerability. The project contributes to disaster preparedness while also improving the financial situation of the families involved.

"We protect the environment while growing a crop that generates income for us." José Adan Brisas Libertarias is very much looking forward to the project that will allow him and other families to start cultivating cocoa. To start with, every smallholder will receive 30 cocoa plants as well as organic insecticides and fertiliser. Every single cocoa plant contributes both to a better livelihood for the families involved and to an improvement in the environmental situation at San Miguel Volcano.

Cocoa beans were once so valuable in Central America that they were used as currency. After being marginalised by coffee cultivation in the 19th century, cocoa has only been gaining ground in the last few years. Much knowledge has been lost. Even the smallholder farmers around San Miguel Volcano have to reacquire the secrets of cocoa cultivation. For that reason, the smallholders involved in the project are given extensive trainings – among other things on organic cultivation methods, pest control as well as drying and fermenting the beans. 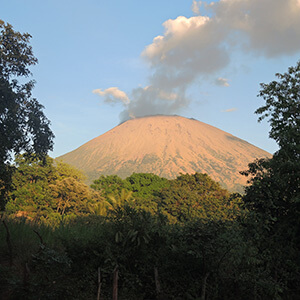 El Salvador is the Central Amercian country with the fewest forests. Reforestation is badly needed.