Food shortage and poverty in the Democratic Republic of Congo

Militias, poverty and famine dominate life in the eastern Democratic Republic of the Congo. But Denise (20), a dedicated Congolese, decided she would not tolerate such conditions any longer. So in 2010 she applied for a scholarship to study agricultural sciences in the town of Mweso. With the knowledge gained from her studies, she planned to establish a tomato farm, where she would explain and demonstrate the cultivation of tomatoes to others in her community. Now Denise has a large tomato plot and also raises cows and goats. She passes her skills on to interested parties, whom she instructs in her field. And because she has an excellent diploma, she now also teaches at the institute where she once studied. She was able to fund her studies through the scholarship that she was given six years ago. It allowed her to acquire knowledge that has been lost in the region as a result of decades of civil war. Today she uses that knowledge to combat malnutrition and poverty.

Agricultural education for the population of the province of North Kivu in the DRC.

Covering the tuition and examination fees of a study course in agricultural sciences at the institute in Mweso and non-material support for scholarship holders.

Number of newly enrolled scholarship holders that study, implement a social project and pass their knowledge on to the wider population.

Upon graduation, scholarship holders produce a surplus in food and see themselves as being better able to make a positive contribution to their region.

The DRC is a country that has been affected by civil war for decades. Colonial rule by Belgium was followed by more than 30 years of dictatorship of Joseph-Désiré Mobutu. When his regime collapsed, there were decades of conflict, mainly in the eastern part of the country. This conflict is fought along ethnic and economic lines as well as based on power politics. Neither the new government under Joseph Kabila in Kinshasa nor one of the strongest UN missions are able to bring peace to the region. That is why the DRC ranks 5th on the Fragile State Index, above countries like Syria and Iraq. (The Fund for Peace, 2015). The civilian population is massively impacted by the conflicts. Apart from the lack of physical safety and the psychological consequences of war, food insecurity and insufficient infrastructure in terms of transportation and education impact the population’s everyday life and future outlook. This hits women hardest (Gender Inequality Index: 149 of 155). The lack of higher education is a great obstacle to the development of the country: only about 13 % of women and 32 % of men have attended a secondary school (UNDP, 2015).

In cooperation with the Congolese organisation CADEP, Studies Without Borders grants scholarships to dedicated Congolese women and men in need. They take part in the programme at the institute for agricultural sciences ISEA in Mweso. While they are studying, the students also start developing social projects, from the empowerment of rape victims to teaching seminars on vegetable farming, raising chickens to prevent protein deficiency to cultivating eucalypt forests to combat soil erosion and deforestation. In this way, the scholarship holders initiate social change in their region. This is intended to foster a peaceful reconstitution and create prospects beyond a wartime economy. A gender quota supports women’s equality in the education sector.

Major challenges in implementing this project arise from the volatile situation and repeated flaring of conflicts on the ground. Due to the lack of electricity and Internet connectivity in Mweso, communication between us and the scholarship holders is very limited and has to go through our partner organisation CADEP. Sending parcels is also expensive and takes a long time, and a parcel can very easily get lost or be detained by customs. To solve these communication issues, the association is also working on installing solar panels at the institute, which will power a small computer lab. 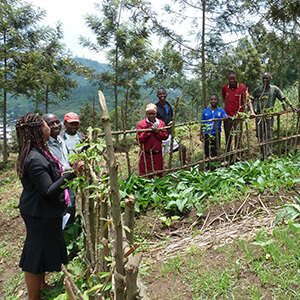 The DRC is the second-largest country in Africa (6.6 times larger than Germany). The Congo has about 200 ethnic groups. The country is famous for its tropical rain forest, its volcanoes and lakes.