Having an anteater in your front garden can be handy in Costa Rica: It deals with the problem of the countless ant trails that make their way into the houses. With its extraordinarily long tongue of up to 60 centimetres in length, an anteater can devour up to 30.000 of the little creatures. It just licks them up using its sticky saliva. As great as the idea of such an insectivorous friend in the garden might be, the natural habitat of the anteater looks very different. The ‘lesser anteater’ (tamandua) that is native to the northwest of Costa Rica prefers to move about in the trees, because that is where it finds the arboreal termites that it feeds on, protection from predators and potential mates. But the migration routes through the forests of Costa Rica are increasingly cut off by pastures, agricultural land and new roads.

Reconnected tropical forests for the protection of the lesser anteater in Costa Rica.

Number of trees that can be be grown, planted and cared for. Up to 600 trees per hectare can be planted in one year.

After three years of being cared for, the newly planted trees are strong and large enough to continue growing and suppressing the pasture grass on their own.

The anteaters can go back to roaming freely and looking for mates. This ensures their survival as a species in the region of Guanacaste.

Inspired by the American lifestyle, a strong increase in the amount of meat consumed in Costa Rica happened in the 1960s, which caused a lot of rain forest to be lost. Areas of rare dry rain forest in the Guanacaste Province had to give way to a species of African pasture grass that was specifically introduced for raising cattle. The result: A reduction in the number of anteaters, a disruption of the water cycle in the area – and as a result, a drinking water shortage. Today, years later, most of the pastures are no longer used. But the grass suppresses any other plants and thus prevents the natural re-forestation and the stabilisation of the water cycle. The lesser anteaters lack the trees they need as sheltered spaces and corridors, and the local population in the village of Hojancha are afraid of running out of drinking water. In less than 25 years, the volume of the Rio Nosara has been shrinking by over 90 per cent and the locals fear that it might run dry altogether. Because the tree roots were no longer there, rain water no longer trickled into the ground, but ran off the surface, which caused the water table to continue to fall year on year. In 1993, some locals initiated the formation of the Fundacion Pro Reserva Natural Monte Alto in order to counteract this development. One year later, these 924 hectares were designated as a protected forest area. The Fundacion is supported by Tropica Verde.

On land owned by Tropica Verde, in cooperation with the local partner Monte Alto, measures for re-forestation are taken that will reconnect existing pieces of forest. After three years the shade of the planted trees begins to suppress the pasture grass and thus encourages the natural re-forestation. The water cycle regenerates and causes an improvement in the drinking water situation in the village of Hojancha, there is greater awareness of environmental issues among the local population and the number of poachers and illegal loggers comes down. The lesser anteater is given greater freedom of movement, which increases its chances of finding a mate and having offspring, and thus also its chance of not going extinct in the area. 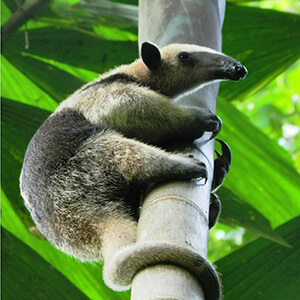 Costa Rica is where you find ‘the pure life’ (pura vida): The country is home to four per cent of all the animal and plant species of the world.