Flight across the Mediterranean

Sea rescue of refugees on the Mediterranean Sea

When refugees have to cross the Mediterranean, they have usually already gone through an arduous journey. And still have a long way to go. Many of them have been through harrowing experiences in their countries of origin and on their way here. For them the sea is a sign of hope of reaching the safety of Europe – but also a great danger. Many of them do not know how to swim, if the boat capsizes they drown. If a rescue ship finds them in time, they are overjoyed to know that they will make it to Europe where they can then apply for asylum. The volunteers on the rescue ship Sea Watch are usually the first people they meet that treat them with respect, and so this deeply humane encounter in a situation of dire need is one that brings authentic joy to both sides.

Drinking water for refugees that are being rescued in the Mediterranean.

Sea Watch buys bottled water and distributes them among refugees in their boats and on board of the Sea Watch 2.

Number of water bottles that can be handed out to refugees.

Refugees that have been rescued in the Mediterranean are provided with an adequate supply of drinking water.

Sea rescue of refugees in the Mediterranean.

There are a great variety of reasons why people decide to flee. Libya mostly sees people from sub-Saharan countries that seek refuge from poverty, oppression and violence, but also Syrians on the run from the civil war there. Also, many people from Eritrea flee to get away from torture and oppression of the country’s authoritarian regime. About 80 per cent of asylum applications of people from Eritrea are approved. But there is no legal way for these people to come to Europe or apply for asylum in their own countries. That forces them to try their luck and make the dangerous journey through Libya and across the sea. In Libya itself, these people are also subject to harsh conditions. They are often imprisoned, tortured and sold off like slaves. If they want to have a chance of a safe and humane existence, they have to get to Europe. Ever since the route through the Balkans has been cut off, the only way to go is on a boot across the Mediterranean Sea.

No one should die in the process of trying to exercise their right to asylum. Sea Watch picks up refugees who are in need of rescue because of the unseaworthiness of the fishing boats and dinghies that they find themselves in. They often drift across the sea without a means of steering and no food and very little drinking water on board. Children in particular quickly are subject to dehydration and once picked up by the Sea Watch team, are the first to be given water. This good deed thus makes a contribution to the primary care for these people. 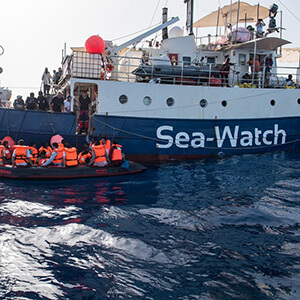 The Mediterranean extends over 2,510,000 square kilometers. At its deepest point it is 5267 meters deep.