Day 10
One meal for a schoolchild in the Gaza Strip

It is hard to learn on an empty stomach

A kitten playing with a ball of steel wire in the midst of rubble. What sounds like a bizarre dream is in fact a graffiti in the Gaza Strip by the political street artist Banksy. But why a cat? His website provides the answer: he wanted to call attention to the destruction in the Gaza Strip, but these days all people look at on the Internet is cat videos. Another look at the reality in the Gaza Strip was to be seen in cinemas this spring. By way of an alternative to the common image of war and destruction, the film Gaza Surf Club showed a rarely seen part of everyday life in the Gaza Strip: surfing on the beach. In stunning images the film described how nice it could be here and that there are families living here with hopes and dreams who most of all have one wish: That their children should have a better life.

School meals for children in the Gaza Strip.

Four schools buy food locally and hire a cook. Every day, she will prepare school meals for 660 children.

Number of school children in the Gaza Strip that get a daily meal.

The health of the children improves, many of them only come back to school because of this.

Improved educational opportunities for children in the Gaza Strip.

Since the last war in 2014, many families in the Gaza Strip still live in the rubble left from countless destroyed houses. They have insufficient access to water. Many have to cook on open fires in the street because of many hours of power cuts every day. Even before the last Gaza war, research has found that one third of children are underweight for their age. Also, the Gaza Strip has the world’s highest unemployment rate, which results in many children having to contribute to the family income instead of going to school.

And this is where our school meals come in: We are in cooperation with four schools run by small independent grassroots initiatives. For six days per week, the children are provided with a meal, which has a three-fold benefit: The school meals help to improve the health of the children; they can concentrate better and are more attentive to their lessons. And a third benefit is manifest: Regular school meals help to give many families one less thing to worry about: feeding their children. Thus many children are sent back to school just because of these school meals. 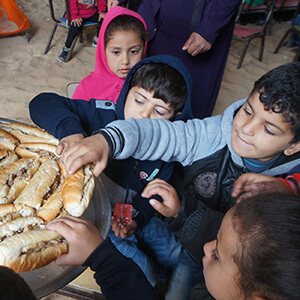 The refugee camps in the Gaza Strip have the highest population density of any place on Earth. The unemployment rate of 48 per cent is also the world’s highest.