Day 9
Rabies vaccine to help save the Ethiopian wolf

The undisturbed Ethiopian highlands are the habitat of one of the rarest mammals in the world: the Ethiopian wolf. Here, above the treeline between 10 000 and 15 000 feet the last of this species have been surviving. Less than 500 animals still roam the mountains. More than half of them live in the Bale Mountains National Park in southern Ethiopia. The rest of the Ethiopian wolves live in a number of isolated populations in the north of the country. These elegant creatures with their auburn fur, pointy ears and long legs almost exclusively eat rodents, and thus do not pose a threat to people and their flocks of goats and sheep. In contrast to Europe, there is no competition between humans and wolves here. They live together peacefully.

Vaccination of dogs and wolves against rabies and canine distemper to save the Ethiopian wolf from going extinct.

Number of animals that can be vaccinated as a result of the donation.

The spread of these diseases, dangerous to both humans and animals, is declining. The Ethiopian wolf population recovers and increases.

Stop the extinction of the last of the Ethiopian wolves.

However, the wolves’ habitat is gradually shrinking. With Ethiopia being highly populated, people are increasingly pushing into the highlands to use to land for agriculture. They allow their cattle to graze there and collect firewood, thereby altering the native fauna. The natural habitat of the wolves keeps being lost and the animals that they prey on decrease in number. In trying to avoid the farmers, the wolves continue to move up to higher ground. But the greatest threat to the Ethiopian wolves’ survival is invisible: The farmers bring with them their dogs, who in turn carry deadly diseases. Outbreaks of canine distemper and rabies are frequently observed, with devastating effect. These highly contagious diseases cause neurological damage, encephalitis, paralysis and end in a horrible death. During the outbreaks in 1990, 2003, 2009, 2014 and finally in 2016, up to 75 per cent of the Ethiopian wolves perished. Such a scale of losses poses a massive threat to the long-term survival of the last remaining Ethiopian wolves. Also, the spread of rabies is dangerous to the health of the local people.

Halting the spread of these dangerous diseases urgently requires comprehensive vaccination of both dogs and wolves. A task force of project employees, veterinarians and local volunteers vaccinates several thousand animals per year (more than 5,000 in 2016) – a laborious undertaking for all involved. In some places the villagers themselves take their dogs to be vaccinated, in others the project staff need to go door to door. Free-roaming or semi-feral dogs also have to be caught and vaccinated, as are the Ethiopian wolves. An oral vaccine – the least stressful and most effective alternative to conventional vaccines – is currently undergoing trials. 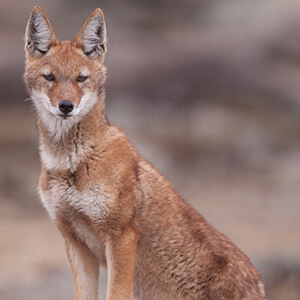 The history of Ethiopia goes back 3000 years and along with Liberia, it is the only African country that was never colonised. The country is characterised by a high degree of biodiversity.