Day 8
30 minutes sport for a disadvantaged child in Germany

School was never really Dusan’s thing. He was usually just did not show up – but since then he has made it. This is not least thanks to his trainer as part of the project Football meets Culture, reached him where his motivation was greatest: his enthusiasm for football. Like many boys, Dusan dreamed of making it big as a pro footballer. Once he realised that school would be a major part of fulfilling that dream, he changed his attitude. Today he has come as far as the under-16 team of Eintracht Frankfurt. Dusan is one of many children and young people in Germany who are in danger of falling through the cracks of the German education system. For that reason, it is important to find different approaches to getting through to children in need of support – for instance football.

Educationally disadvantaged children from deprived neighbourhoods are supported through supplementary lessons and football training and thereby motivated to study more.

Number of children that will receive supplementary lessons and football training.

Targeted support to enhance reading and maths as well as self-confidence and social skills through football training.

Germany’s latest National Report on Education has shown that the German education system is still faced with key challenges. It has still not managed to disentangle the close link between the social background and educational success. This particularly affects children from a migrant background. They disproportionately often do not advance beyond lower secondary and special needs schools, which has an effect on their career prospects: “People who don’t finish school practically have no chances when it comes to gaining access to vocational training, and a year-9 certificate opens up only a very limited range of careers,” says Professor Kai Maaz (DIPF). Young people with foreign roots are more than twice as likely to leave the educational system without a certificate than for Germans. This is also partly due to the fact that more children who are form a migrant background (55 per cent) are in high-risk situations (such as unemployed parents) than those who are not (20 per cent). The proportion of children whose parents have not finished school is also much higher among migrant families.

The idea behind Football meets Culture is to use football to encourage children and young people from problematic backgrounds to learn. By combining football training and supplementary lessons, the goal is to foster better social and communication skills within a team and furthermore get the kids interested in education and culture. Beyond the personal benefits to the children, improved performance in school, higher motivation to get get involved with culture and the enhancement of social skills through sports also make a key contribution to the integration of the socially disadvantaged and migrants into our society. 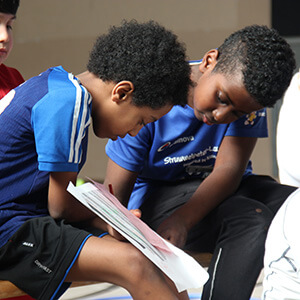 Migration has always been a part of German life. Between 1950 and 1014, 44 million people came into the country, while 32 million German and non-Germans have emigrated.